This week BikeWalkLee released a comprehensive report on new and improved bike/ped facilities throughout Lee County over the three year period, FY 2011-2013.  The county is making impressive progress towards its goal of filling the many gaps in our bike/ped network.  Thanks to all the jurisdictions, FDOT, and MPO staff who provided information for this report.  This overview is the first in a series of blog posts on the report, with a separate blog post for each jurisdiction.  Click here for the full report.

Here are links to the six jurisdiction blog reports:

Lee County is a large far-flung area, with 804 square miles of land and 625,310 people.  There are almost 1,000 miles of major roadways (arterials and collectors) and hundreds of more miles of local roads.  It's sometimes hard to see the totality of new bike/ped facilities that are being added in the county, but progress is happening!  For the second year, BikeWalkLee has worked with all the local jurisdictions, FDOT and Lee MPO staff to report on new and improved bike and pedestrian facilities countywide added over the past year,  along with facilities underway that will be online during the coming year.

Countywide, during 2012, 41.4 miles* of existing paved shoulders were converted to signed and marked bike lanes, and 8.0 miles of new on-road bicycle facilities were added.  In addition, 7.1 miles of new shared use paths were constructed, along with 19.8 miles of sidewalks*, and 1.3 miles of shared use paths were widened.  A major feature of the MPO countywide bike/ped plan was completed in 2012--LeeDOT completed wayfinding signs on two demonstration loops envisioned in the plan--The Tour de Parks Recreational Loop and the University Loop.  In total, 65.4 miles are now connected by wayfinding. 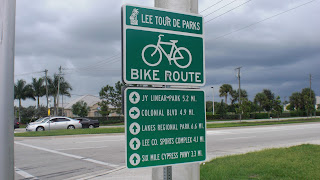 Total new and improved bike/ped facilities on all public roadways in Lee County: 2011-2013
(in lane miles. i.e., both sides of bike lanes & sidewalks counted)
**total new facilities = new on-road bike facilities, plus new SUPs, and new sidewalks
----------
* throughout the report, miles listed refer to "lane miles", which means that both sides of bike lanes and sidewalks are counted, consistent with national reporting norms.

The good news is that since the MPO adopted the countywide master plan in early 2011, the county will have added a 3-year total of 133.2 miles of new bike/ped facilities.  This total doesn't include the 46.2 miles of paved shoulders that have been converted to bike lanes or other important improvements, such as 88.4 miles of biking connected with wayfinding signs or widening of shared use paths.  Many of these new bike/ped facilities are part of larger road improvement/expansion projects, especially on state and county-maintained roads.  As a result of the complete streets policies adopted by the county in 2009, bike/ped facilities are now included in the design of almost all road projects.

Simply looking at the number of miles of new bike/ped facilities doesn't tell you the full story of the progress in creating a connected bike/ped network.  For example, in Cape Coral, the construction of 2.2 miles  of new bike lanes actually resulted in a new 17-mile connected biking loop, since these two small bike lane additions closed the gaps, creating two new biking loops.  Another exciting development was the 2011 completion of Fort Myers Beach's North Estero Blvd.  drainage and road improvement project which fully incorporated a complete streets approach.  N. Estero Blvd. serves as a model complete streets project for other communities in Lee County to consider.

There are other indications of progress not just in the construction of new facilities but in usage of the county's bike/ped network.  As an indication of the value of investments in this infrastructure, Sanibel conducted its second shared use path survey this year and found that during the intervening 6 years since the first survey, path usage had increased by both cyclists (up 56%) and pedestrians (up 77%).  In addition, as a result of a model public/private partnership, a new Sanibel Path Welcome Center was opened this year.
The new bike/ped facilities throughout Lee County reflect the County's commitment to complete streets (policy adopted in 2009), and the subsequent adoption by the Lee MPO of the first countywide bicycle and pedestrian master plan adopted in 2011.

Because there are at least seven jurisdictions involved (unincorporated Lee County, five municipalities, and FDOT), there was a need for a countywide plan.  As noted in the master plan, Lee County has significant bicycle and pedestrian facilities but they are fragmented and lack continuity and connections.  The countywide master plan identified 668 miles of bicycle gaps and 758 miles of sidewalk gaps. (Note:  this data is in terms of linear miles vs. lane miles and only covers arterial and collector roads, not local roads.) (See exhibit MM from the master plan for the distribution of those gaps by jurisdiction.)  Jurisdictions throughout the county are working to fill these gaps so that the goal of having a comprehensive and cohesive countywide network can become a reality.

So, take a walk, a run, or a bike ride and explore these new and improved biking and walking facilities. Spread the word to your friends and neighbors. Send us a photo or comment on BikeWalkLee's blog or Facebook page about these new facilities. Last but not least, say “thank you to the elected officials and government staff who made these improvements possible. Progress is being made. Thanks, LeeDOT, FDOT, Lee MPO, and local cities and towns!
Click here to continue reading the Overview and to read the full report.

New and improved bike/ped facilities on all public roadways in Lee County completed in 2011
(in lane miles. i.e., both sides of bike lanes & sidewalks counted)
*projects planned for 2011 were completed in 2012, so shifted to 2012 report

New and improved bike/ped facilities on all public roadways in Lee County to be completed  in 2013
(in lane miles. i.e., both sides of bike lanes & sidewalks counted)
**Includes 1.2 mile Pond Apple/Shipley trail