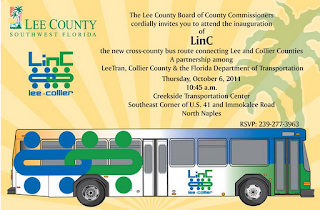 Remember the LinC route, connecting Lee and Collier Counties for the first time, that was launched in October 2011?  At the time the route was initiated, LeeTran projected the annual ridership on that route to be between 20,000-25,000 passengers a year.  Guess how many they had??  95,000...almost 4 times more than projected!  Clearly, there is a growing demand for transit in Lee County, and demand for more services between Lee and Collier counties.

On Oct. 30th, News-Press published a story on the issue:  "LeeTran ridership soars year-over-year".
Excerpts:
“Lee County is embracing public transportation like never before,” said Transit Director Steve Myers. “Transit ridership is up nationwide, but among systems our size, growth has averaged around 5 percent. Achieving 17 percent is a real accomplishment.”

Myers cited volatile gas prices, route and schedule improvements, and improving employment numbers as factors that may be driving the ridership jump. “We also opened a new transfer center at Edison Mall early this year, and have installed a number of bus shelters along busy routes,” said Myers. “Both amenities have improved our passengers’ comfort and may contribute to more ridership.”