Complete streets are about making the streets safe and accessible for all users--including the vision-impaired.  Kudos to the SWFL Council for the Blind for raising awareness in North Fort Myers today, National White Cane Day., and to News-Press for       covering story.

Joyce Gilbert can’t see oncoming motorists when she tries to cross the street, so she has to trust they will see her and her guide dog.   But they don’t always.

“I was hit three times in my lifetime,” Gilbert said. “And I’m very lucky to be here.”
On Monday — National White Cane Day — Gilbert made sure motorists noticed her. She and about a dozen other blind, partially blind and sighted people spent a few hours walking back and forth across busy North Fort Myers intersections to raise awareness of the dangers faced by visually-impaired pedestrians. 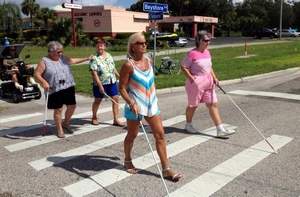 
Gilbert, 79, had both eyes removed after she was hit in the face with a snowball as a teenager. Now, she gets around with help from her labradoodle, Amy. But the guide dog cannot tell her when it is safe to cross the street, so Gilbert has to listen and judge when her path sounds clear.


About 20 years ago, a car ran over Gilbert’s white cane while she was crossing Fowler Street. In 2004, a car backed into her on Whiskey Creek Drive while she was walking with her guide dog. Gilbert injured her hip in that accident, and still walks with a limp. A year later, Gilbert was taken to the hospital with a concussion after a car hit her on Whiskey Creek and Beechwood Trail.


There have been countless other close calls, Gilbert said, especially when she used to cross College Parkway to catch her bus.  “There was a lot of honking of the horns,” she said.

Gilbert’s first husband fell victim to one such accident. He was struck and killed while walking with his white cane in a Minnesota crosswalk more than two decades ago.


As cars whizzed by Monday, Doreen King, of North Fort Myers, looked skeptically at the intersection. With her limited vision, crossing alone would be a daunting task.
“I could not in any way cross that road,” King said, becoming emotional.

King, who lost most of her sight seven years ago because there wasn’t enough blood getting between her optic nerve and brain, can’t see the traffic signals. She listens to judge when it’s safe to cross — but that won’t prevent a car turning right on red from hitting her.

Traffic signals that make noise would help, King said. The signals where her group crossed are silent — and some don’t even cycle properly.

King first started the National White Cane Day event three years ago because she was appalled by how many people don’t yield to visually-impaired pedestrians. As a member of the Southwest Florida Council for the Blind, she helps raise money for local, blind students and raise awareness for issues affecting the blind community.


“I just discovered that there are so many people who do not know what a white cane means,” King said.  Florida statute says vehicles must yield to pedestrians with obvious impaired mobility (including pedestrians walking with guide dogs).

Pedestrians with other physical handicaps also came out Monday to support National White Cane Day. Wilma Peterson, who had both her legs amputated, joined the group in her electric scooter. Peterson, 58, of North Fort Myers, was hit by a car and knocked off her scooter in a crosswalk last year.

“It’s like they don’t see you,” Peterson said. “It does scare me sometimes, but (I’ve) got to get over the scare because this is the only way I have of getting around.”

Linda Moody, 51, of North Fort Myers, has her vision but participated with her eyes closed because she wanted to see what being blind is like.

“Your equilibrium’s off when you do that, so you tend to go either left or right when you’re walking straight,” Moody said. “It’s scary.”