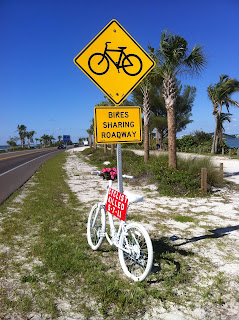 More than a year after Tracey Kleinpell’s death, the state attorney’s office has announced the woman whose truck hit her as she was riding her bicycle will not face criminal charges.
Kleinpell was cycling across the Sanibel Causeway with her husband, Gordon, on May 7, 2011, when a truck drifted out of its lane and struck her. Kleinpell was knocked over the guardrail and into the water, from where she was brought to shore by passing boaters. She was pronounced dead after unsuccessful attempts to resuscitate her.


Theresa L. Shirley, 46, of Bokeelia, was driving the truck. After the crash, she told an investigator she fell asleep at the wheel.


“There was not enough evidence there under Florida law to be able to charge Theresa Shirley with vehicle manslaughter,” said Samantha Syoen, spokeswoman for the state attorney’s office.
Instead, the Florida Highway Patrol will cite Shirley for failure to remain in a single lane. She is due in Lee County court at 8 a.m. Monday.

Kleinpell’s father, George Henault of Fort Myers, said the family is devastated by the decision.
“No words can explain how bad we feel about not bringing charges against her,” he said. “She killed our daughter. It’s as plain and simple as that.”

The Florida Highway Patrol conducted a review of the case and requested a warrant for DUI manslaughter. The request was sent to Assistant State Attorney Anthony W. Kunasek a few weeks ago, and May 10, Kunasek determined there was not sufficient evidence to grant the warrant.
A screening of Shirley’s blood showed no alcohol, but found several prescription drugs, according to a memo sent by Kunasek. Shirley tested positive for drugs, including a muscle relaxant and a pain reliever. The drugs were prescribed to Shirley, and the levels in her blood fell within the usual therapeutic range, according to a Florida Department of Law Enforcement lab test.

Witnesses who saw Shirley before the crash and at the scene said she did not appear to be impaired. Medical personnel who responded to the accident described Shirley as lethargic, sleepy and groggy.
Shirley was not given a field sobriety test at the time of the crash, which Kleinpell’s mother, Donna Henault, found unacceptable. To be kept waiting a year for justice and then to have no charges come of the investigation is devastating, she said.

“When I look back at things,” she said, “I just feel like they bungled it.”

“In order for the state to prove vehicular homicide, the state must prove more than a failure to use ordinary care,” Kunasek said in the memo. “The state must prove the operation of the vehicle driven by Ms. Shirley was done so in a reckless manner, likely to cause death or great bodily harm. Falling asleep at the wheel is insufficient to establish vehicular homicide by itself.”


Donna Henault said in the year since she lost her daughter, the pain has gotten worse. She still can’t talk about it without crying. Since their daughter’s accident, George Henault has needed several heart surgeries, including a five-way bypass.


“This accident is slowly killing him,” Donna Henault said. “The doctor said there is such a thing as broken heart syndrome, believe it or not.”

Donna Henault said she no longer travels across the Sanibel Causeway, because seeing the ghost bike placed there in Kleinpell’s memory is too upsetting. She had to leave the area last week, when Kleinpell’s friends gathered on Sanibel Island to commemorate the one-year anniversary of her death.

The Henaults went to Connecticut to visit their other daughter, Tina Peck, and had a small family memorial. To remember Kleinpell’s birthday May 3 and her death May 7, they went to the beach and released balloons adorned with butterflies and rainbows.

Darla Letourneau, of BikeWalkLee, said she is appalled Shirley will not be charged because it seems like an open-and-shut case, with Shirley clearly at fault. These types of cases have set a precedent that result in no consequences for killing a cyclist or pedestrian, she said.

“We have to figure out how to take this outrage and do something positive,” Letourneau said. “Something has to change.”