News-Press article on the 1st anniversary of the death of a cyclist killed on the Sanibel Causeway highlights the lack of action by FHP to bring charges against the driver, with quotes from BikeWalkLee. 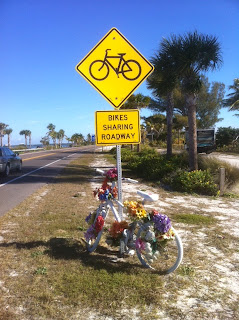 A small memorial held Monday to mark the one-year anniversary of the death of the Fort Myers cyclist killed while riding over the Sanibel Causeway, also served as a painful reminder to some that after a full year, no one has been held responsible for her death.

Tracey Kleinpell was struck and killed May 7, 2011 while riding with her husband Gordon to Sanibel Island.

“There were tears, but it was a joyful celebration, because that is who she was,” said family friend Mary Dahl. “The whole theme of the day was about how she was a very special person.”

Dahl, one of about 25 people who attended the ceremony, said Kleinpell’s death continues to take a toll on her father and mother, George and Donna Henault. “They are having a horrible time with it,” Dahl said.

The Henaults, who were out of town Tuesday, declined to be interviewed for this story, but they previously told The News-Press they hoped the driver of the truck, Theresa L. Shirley, of Bokeelia, would face charges in their daughter’s death. They also said they were concerned about the length of time the death investigation was taking.

The Florida Highway Patrol said Shirley was traveling north when she veered across the road and struck Kleinpell, sending her over a waist-high guardrail and into San Carlos Bay.
She was pulled out of the water and brought to shore by passing boaters but was pronounced dead after attempts to resuscitate her were unsuccessful.

Shirley was not injured, and she wasn’t cited for the crash at the time. Since that day, there has been an ongoing death investigation but there has been no word if charges are expected to be brought against Shirley.

The perceived lack of action has some in the cycling community afraid there won’t be a resolution in the case.

“I’m really disappointed and frustrated,” said Darla Letourneau with BikeWalkLee, a community group geared toward raising public awareness about safe travel on the streets in Lee County. “It’s been a year, and it’s been total silence.”

The investigation has progressed during the past year with the Florida Department of Law Enforcement working with FHP to gather information including toxicology reports.

In recent weeks, FHP handed over results of the investigation to the state attorney’s office, the agency that will ultimately determine if charges will be filed in the case.

State attorney’s office spokeswoman Samantha Syoen said the case is currently under review, but she said there is no timetable as to when a decision might be made.

“Since it took Florida Highway Patrol one year to investigate, it will take us time to go through everything they handed in,” she said. “We don’t set a timetable to do a thorough review.”

Syoen added the state attorney’s office recently had to request additional elements from FHP for the review, and the office is still waiting for that information.

Letourneau said the lengthy investigation has people concerned no charges will ever be filed.
“I’m very worried it’s going to end up as nothing,” she said. “This case was clear cut. There was no doubt the driver was at fault, and if they can’t bring charges in a case like this, they will never bring charges.”

Letourneau said there is a pattern state and nationwide of charges not being filed against at-fault drivers who hit bicyclists and pedestrians, which has promoted a culture of distracted driving.

A white ghost bike, which was placed on the causeway as a memorial to Kleinpell after her death, serves as a daily reminder of the loss of a woman, who would have celebrated her 47th birthday last Thursday.

Ghost bikes are traditionally placed as roadside memorials where a cyclist has been killed or severely injured. They are also intended to remind motorists to share the road.

Letourneau said she’s glad the bike is still there and hopes it prevents future tragedies like
Kleinpell’s. “For people who come off Sanibel, it is a sober reminder every day,” she said.