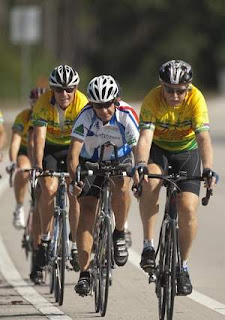 From First Lady Michelle Obama’s Let’s Move campaign to workouts that play out on prime time TV — with shows such as NBC’s “The Biggest Loser” — health advocates are waging war, one against Americans’ ever-expanding waistlines.

Now, Lee County wants to help design the attack.
The county is one of 50 in the nation — and one of only two in Florida — searching for ways to combat obesity through Collaborate for Healthy Weight, an initiative to improve obesity prevention and treatment. The National Initiative for Children’s Healthcare Quality and the Health Resources and Services Administration are leading the project.

The Lee County Health Department applied for a yearlong second phase of the initiative, which began in March. Over the next year, leaders will build on lessons learned during the first phase of the project and test new interventions, using input from national experts through consultations and webinars.

“The Health Weight Collaborative may become a model for the nation,” health department spokeswoman Diane Holm said, “and we wanted to help write the model to ensure it was a good fit for our community.”

Sarasota County served as one of 10 teams nationwide that participated in the first phase of the program, which continues through July. In 2010, prior to the project, Sarasota schools ignited a firestorm after they sent letters to parents informing them that their children were overweight.

As part of the collaborative, the county tried a new approach, one that has been better received among parents. It began sending Healthy Goal Worksheets home with elementary students to assess family health and lifestyles. School nurses will follow up with families regarding their goals.

“Everybody who has something to gain or lose by this happening or not happening (is involved),” said Dan Moser, of BikeWalkLee. “The hospitals have to keep people out of the emergency rooms and out of their care. For the health department, chronic disease is a major deal.”