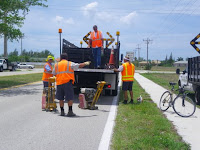 Kudos to the Cape Coral advocates, City Council and city staff that worked to bring this project to fruition!  The additional 1.1. miles of bike lanes mean that there is now more than 17 miles of connected bike lanes.  Next week is Bike to Work Week and a perfect time to try out this new biking facility. 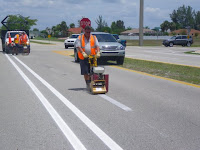 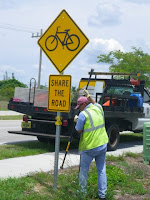 Crews are putting the finishing touches on the 1.1 miles of bike lanes on Oasis Boulevard and Agualinda Boulevard.  Pending a final review of the work and sign placements next week the Transportation Department is expected to announce the lanes are officially open.

Completing this short but critical missing link means that bicycle riders now have more than 17 miles of connected bike lanes in this west southwest part of the city.  For example, riders may now choose to start at Cape Harbour and pedal all the way to the intersection of Veterans Parkway and Pine Island Road at Burnt Store Road.  This can be done without encountering a single traffic light, and only a handful of intersections with stop signs.  Part of this route is along  very scenic Surfside Boulevard next to the South Spreader.  A variety of loops is possible for those wishing shorter routes.  The new bike lanes have created a 5 mile rectangle route covering portions of Beach Parkway, Sands Boulevard, Eldorado Parkway and Agualinda Boulevard.  Many walkers and handicapped persons with mobility aides also use the lanes, particularly in areas lacking sidewalks.

The request for the these lanes was submitted by the SW Cape Coral Neighborhood Association early in 2011.  The City Council unanimously approved the request this past February.  Board members and BWL volunteers Patricia Young and Steve Chupack helped get the request through the review process.  They expressed their appreciation to the Council,the Transportation Advisory Committee, and department staff.  A special thanks to the many supporters who signed petitions or in other ways indicated their strong advocacy for these bike lanes.