Bike/Ped safety was again in the spotlight at the MPO Board meeting on Jan. 16th.
At the Jan. 16th Lee MPO Board meeting, the MPO Staff Director, Don Scott, reported on the implementation of the Bicycle Pedestrian Safety Action Plan (BPSAP) that the Board adopted in September 2013.  This update was a follow-up to a request at the December Board meeting by Cape Coral's Mayor Sawicki that staff report back to the Board on its implementation and urged local jurisdictions to be acting to implement the BPSAP in their jurisdictions. 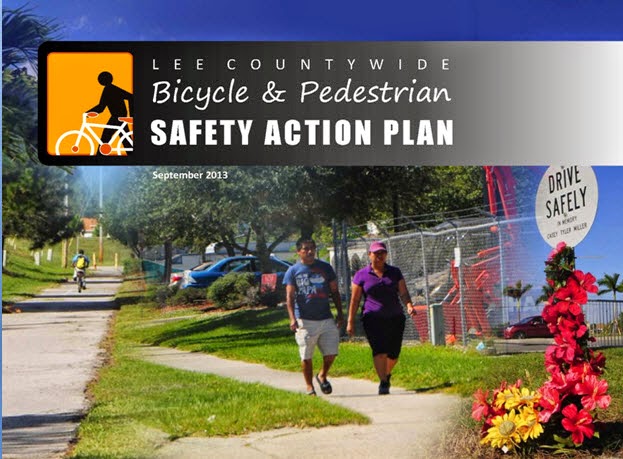 Background
The purpose of the Safety Action Plan is to reduce bicycle and pedestrian injury and fatality crashes through a wide range of recommended activities--from education, engineering, to enforcement.  The Action Plan focuses on 18 specific recommendations (both short-term and long-term), with specific milestones and assignments for action. Click here to review the plan.

Staff Report
Don Scott made a PowerPoint presentation (click here), which reviewed what the Action Plan called for and how we're doing on implementing the 18 recommendations.  His update is just preliminary and will be expanded into a comprehensive report to the Board when each jurisdiction and agency responsible for implementing components of the plan has reported on its activates.  A similar review and report is being prepared for the Board on the status of implementation of the 64 recommendations in the 2011 MPO Countywide Bicycle Pedestrian Master Plan.  The Bicycle Pedestrian Coordinating Committee (BPCC) will be focused on both these reports in the coming months.

See the PP for the list of actions taken to implement the report:


Don also shared with the Board the latest bike/ped fatality and injury trends (see the graphs included).

Board Discussion
Bonita Mayor Nelson said we're doing a pretty good job of tracking bike/ped injuries and fatalities but what about tracking usage?  We need to have data on how many people are using our facilities and asked what are we doing to get this kind of data.  Don Scott responded that the TIGER grant requires "before and after" counts, so in the project area, we will begin to collect data.  He reported that FHWA is looking for 4-5 MPOs to participate in a demonstration project on bike/ped counts and the Lee MPO is being considered as a candidate for this demo.

Commissioner Mann stated, "We're all totally committed to the complete streets idea." He expressed concern that the county is growing and that growth is putting more demands on our scarce transportation resources, threatening our efforts to improve the county's infrastructure so that our roadways are safer for all users, including pedestrians and cyclists.  He was particularly concerned that the Board of County Commissioners is threatening these efforts further by reducing road impact fees which play a vital role in funding the transportation needs created by growth.

Commissioner Mann described his experience driving to the Board meeting, where there was a busy, high speed road with no biking facilities which he thought made the road too dangerous for safe cycling and suggested that there may be some roads where prohibiting cyclists may need to be considered.  MPO staff responded that cyclists are considered by law to be vehicles and have the same rights as cars to be on the road.

BikeWalkLee's Comments
BWL's Darla Letourneau responded to some of the comments made by Board members, and drew on the recent LAB visits.  She noted examples shared by Steve Clark from around the country about bike/ped counting and about how to get progress fast by addressing as many of the concerns as possible during resurfacing projects.  That's the most cost-effective time to add or widen bike lanes, install road diets and other treatments (esp. when compared to the cost of retrofits down the road).  Letourneau urged local and state agencies to "think outside the box" and work to remove the current impediments infringing on this proven approach for cost-effective bike/ped safety improvements.

She reminded the Board that the stated vision of the BPSAP is "a zero-fatality transportation system for bicyclists and pedestrians throughout Lee County".  She said, "setting quantitative targets for reducing bike/ped injury and fatality crashes is a key part of the BPSAP, and it's time for the baseline to be established and for the numerical targets to be set."  The plan calls for a 6% reduction in 2015 (separate for bike ped and separate for injuries and fatalities), reaching a 10% reduction goal by 2020.

Letourneau said the board needs to track how we're doing against those targets and if we're not making progress, we need to revisit the strategies adopted to achieve that goal...the ultimate measure of our collective success is whether these injury and fatality crashes are being reduced.

LAB Visit
Letourneau followed up on Secretary Hattaway's earlier comments about the importance of the visit to Lee County and other Florida communities by the League of American Bicyclists' Bicycle Friendly Communities expert (Steve Clark).  "Steve Clark's visits to Lee County communities (Sanibel, Cape Coral, and Bonita Springs) over the past week have been an extremely valuable opportunity to get a national expert's on-the-ground assessment of our current facilities and practices and what is needed to make our communities more bike-friendly," said Letourneau.  Click here for the detailed blog post about these visits.

Letourneau told the Board that the key to these visits is bringing together the broad array of stakeholders--elected officials, city staff, advocates (including BWL and CCBP), bike shop owners, committee members, and other community players, both to do a group bike ride to assess what's out there, then a debrief to discuss issues and strategies for improvement.  Steve Clark will be back on Feb. 4th for a similar half-day visit to the City of Fort Myers.  Letourneau thanked the cities and their staffs for arranging and participating in these visits.