It's been a busy and exhilarating week for bicycle and complete streets advocates and stakeholders in Lee County, and I wanted to quickly share with the BikeWalkLee network some initial observations and take-aways, along with links to the media coverage and my video interviews with Steve, so you can hear directly from him about some of the "good, bad, and ugly" of what he saw and experienced during his whirlwind week.  He'll be back to visit Fort Myers on Feb. 4th, so stay tuned for more reports. 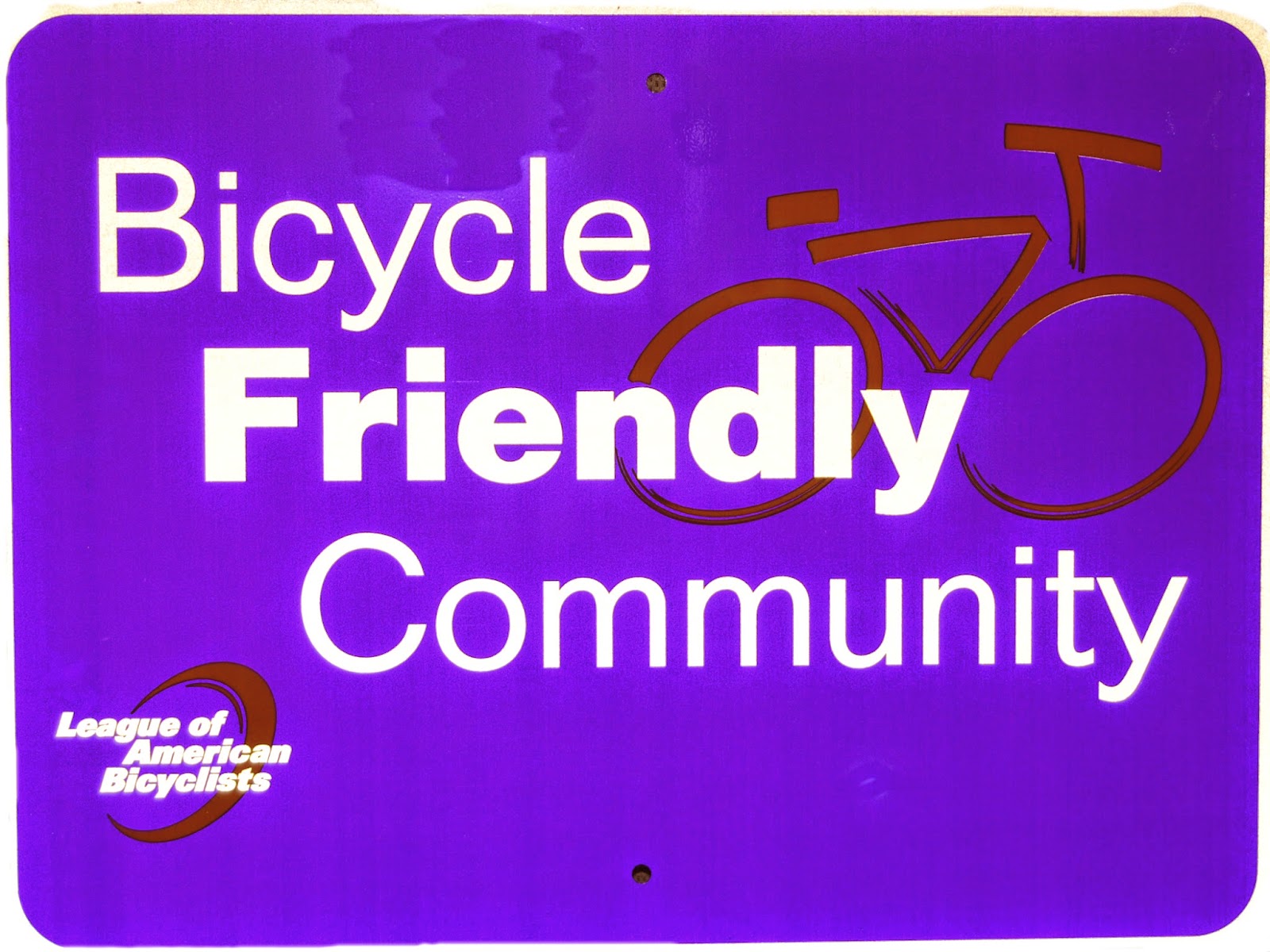 Lee County was selected as one of the 100 communities that the League of American Bicyclists is visiting in 2015, as part of its new initiative to bring bicycle-friendly expertise directly to the local level, thanks to the support of Trek and Trek dealers.  These visits are an opportunity for local communities to get some hands-on technical assessment of its bicycling infrastructure and to learn about best practices from other communities, with the goal of making communities such as Lee County more bicycle friendly.

Steve Clark, the League's Bicycle Friendly Community Specialist conducting these visits, is a long-time bicycle advocate and expert, who has done everything from being the first bike/ped program manager in Boulder, CO (now one of the most bicycle-friendly communities in the country), to co-founding the Minnesota Coalition of Bicyclists, serving as Past President of the League of American Bicyclists, as well as being an independent transportation planning consultant.  Given his extensive travels across the country visiting 75+ communities a year focused on bicycle-friendly practices, there's probably no other one person who knows as much as Steve about America's biking infrastructure, programs, and culture from which he can identify best practices to share with other communities.

Steve spent the week (Jan. 12-16) in SWFL, experiencing the good, bad, and the ugly of SWFL's biking world as he met with a mix of city staff, elected officials, committee members, advocates and other stakeholders in five SWFL cities--Sanibel, Naples, Punta Gorda, Cape Coral and Bonita Springs.    Each visit was a half-day event with about 12-15 participants that included a short bike ride followed by a debriefing session.  In addition to his city visits, he also crammed in other community events, bike rides, lunches, etc. with some of the advocates and officials, not to mention experiencing our road by bike on his travels from Sanibel to his meetings across the county.

In Sanibel, he attended the Sanibel Bicycle Club's monthly potluck meeting where he was the feature speaker, energizing the 75 local advocates in attendance.  On Thursday, we set up an interview for Steve with NBC-2 News, which took place at the Calusa Nature Center (where I also video-taped an extensive interview with Steve).

Also on Thursday, BikeWalkLee organized a "meet and greet" event for him, hosted by the Trek store in Fort Myers.  It was a great opportunity for local advocates, cyclists, bike shop owners, and others  to chat with Steve and with each other.  Even the Executive Director of the Florida Bicycle Association, Becky Afonso, drove down from Tampa for the event. During Steve's remarks to the group, he talked about the League's new "6th E"--EQUITY--and the importance of that in determining whether your community is bicycle-friendly.  Check out my video of Steve's equity remarks at the Trek event.

There's been extensive media attention to Steve's visit.  In addition to the NBC-2 News story that aired on Thursday night, News-Press reporters and photographers attended the Trek "meet and greet" on Thursday, participated in Friday's Bonita ride and debrief meeting, and attended the Lee MPO Board meeting on Friday to hear the discussion on bike/ped safety issues which included discussion of Steve's visits.

Here are links to the media coverage:
I also played "reporter" and video-taped two extensive interviews with Steve after his three local visits, to capture the highlights of what he saw both on his long rides from Sanibel to his meetings in Cape Coral and Bonita Springs (which included riding through Fort Myers Beach); some of his recommendations to each of those communities; and his observations about our community and some immediate steps we could take to become more bicycle-friendly. [Note: these videos were done "on the spot" and are unedited.] It was truly a pleasure to spend time with Steve, who is not only knowledgeable and passionate about bicycling, he is an outstanding communicator about why a bicycle-friendly and complete streets community improves the quality of life for everyone.
Take-Aways and Observations
The three biggest take-away messages for me from his visit were:

1.  Being bicycle-friendly shouldn't be viewed as "what can be done for the cyclists".   As he told the Sanibel Bicycle Club on Monday night, " Cities that are the most successful are the ones that are not just focused on bicyclists; but rather on what biking can do for the community. Biking helps everyone.  It reflects the community value--that it's a good place to live, it is a more vibrant economy."

3.  Cities that are the most successful have a strong 3-legged stool--staff, policymakers (often strong mayors), and advocates. If one of the 3 legs are missing or are weak, it is difficult to be a bicycle-friendly community.  The key is to keep working to build and maintain each of these critical legs...then you have synergy and strength.

Steve was very complementary of the passion and commitment he saw in the advocates he met in SWFL--BikeWalkLee, the Cape Coral Bike-Ped group, the Sanibel Bicycle Club, and the Naples Pathways Coalition.  It's clear that many of the improvements that are coming to our area to make it more bicycle-friendly are being driven by the advocates.  The task ahead is to strengthen the other two legs of the stool.

We're looking forward to his Feb. 4th visit with the broad group of stakeholders in the City of Fort Myers, and will share with you highlights from that visit and Steve's key recommendations to the City.

Steve's week in Lee County has been extremely helpful in bringing the 3-legs of the stool together, to strengthen our partnerships and commitments to finding ways to make our communities more bicycle-friendly.  As advocates, we feel energized and excited about the momentum that has been created by the ideas, strategies, and best practices he brought from other communities across the country.  We're looking forward to his recommendations report to the cities he visited...but we're not waiting for a piece of paper...he gave us lots of recommendations in each of the debriefing sessions that the participants are already busy looking into.

Huge "thank you's" go to everyone who helped make these visits a success--Steve Clark, who gave us his undivided attention and was most generous with his time and talents;  to city officials and staff, along with CCBP, that organized each of the half-day meetings (esp. the leads for organizing each visit--Sanibel's City Manager Judie Zimomra; CCBP's Carolyn Conant (Cape Coral): and Bonita Springs' City Planner Jenn Hagen); to Trek for both sponsoring the LAB national initiative and to the local store (thank you Joe DuBois and Jen) that hosted our "meet and greet" event; to everyone who participated in the city visits; to those who came out to the Trek "meet and greet" and to the Sanibel Bicycle Club potluck meeting; and to the media (NBC-2 News and News-Press) who participated in the events and covered the story.  I'd also like to thank BikeWalkLee's Dan Moser who co-coordinated (with me) the overall planning and coordination for Steve's SWFL tour.

All of these participants plus City Manager, Judie Zimomra, participated in the 2-hour debriefing meeting after the ride.

Cape Ride participants: Gary Aubuchon with CCBP, Dan Moser with BWL, Mike Swanson with CCBP, and Cape Police Sergeant Jon Kulko.  The next morning, this riding team was joined by staff from Public Works, Parks, and the Police Departments of the City of Cape Coral, along with members of the CCBP group, including Carolyn Conant (leader) and BWL's Cape rep, Steve Chupack.
Trek "Meet and Greet" event, Jan. 15th: