Article from yesterday's Bonita Springs LAB/Steve Clark visit, looking at how to make SWFL a more bike-friendly place.  Be sure to watch the two lengthy video--one while they're out on the road and the other an interview with Steve at the end.This was the 5th city he visited in SWFL and he'll be back on Feb. 4th to visit Fort Myers.
Click to watch the two videos: 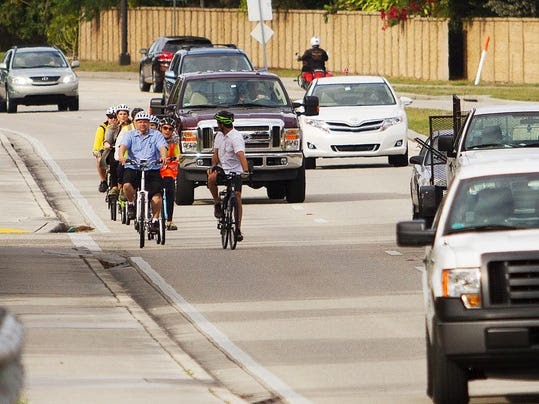 While Bonita Springs officials and bicycle activists did a 90-minute ride Friday with Bicycle Friendly community specialist Stephen Clark, a young male motorist blared the horn. Another motorist, between 25 and 40 years old, told councilman Mike Gibson to get off the road and onto the sidewalk.

And, Thursday, an older motorist almost ran Clark over while he biked in south Fort Myers.

This is the culture the League of American Cyclists official entered during his week visit in Southwest Florida. After visits to Sanibel, Naples, Punta Gorda and Cape Coral and Bonita Springs, Clark will tour Florida's other coast before seeing more of Fort Myers on Feb. 4.

"One of the reasons I came here is there is a safety problem," said Clark, based out of Washington. "The crash rate seems to be pretty high, especially in Southern Florida.

"Also, a lot of people come to Florida. This is where they come for vacation. If they see examples of communities that are more bike friendly, they'll take that back to their communities. This could have a big impact."

Over the years, Florida has consistently ranked as the most lethal state for cyclists in the nation. California counted the most fatalities between 2010-12, with nine more fatalities than Florida's 329, according to an Governors Highway Safety Association report from October. Proportionally, Florida would still rank the worst as California counts 20 million more people than Florida.

Lee County is ranked No. 9 among the top focus areas in the state because of the high number of bike and pedestrian crashes and fatalities.

In 2014, there were eight cyclist fatalities on Lee roads. There also were 196 crash-related injuries involving cyclists last year, the most in 14 years.

Clark nearly became a statistic when he turned left on a green arrow onto McGregor Boulevard in south Fort Myers earlier this week. A motorist, who should've been stopped, he said, failed to yield and caused him to make an emergency maneuver to avoid a crash.

Clark, 57, said he has been riding consistently since his days as a paperboy. He has a close call about every five years, he said. 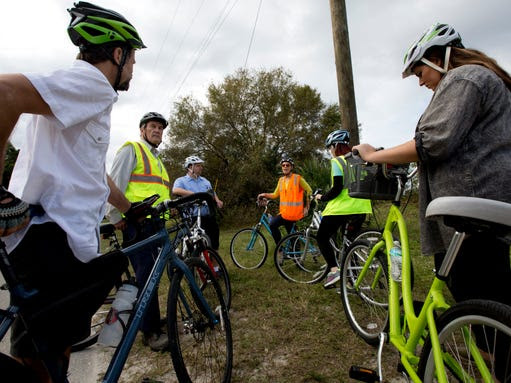 Jenn Hagen, a planner for Bonita Springs, center, speaks during a bike tour of Bonita Springs with Steve Clark from the League of American Cyclists, left, and others on Friday. Clark is visiting Southwest Florida to talk to communities that are interested in apllying to be bike-friendly communities.(Photo: Andrew West/ The News-Press)
Here's video of Steve giving advice on riding safely, during yesterday's Bonita ride with officials.
"This is probably as close as it's ever been but it could have happened in Portland or Minneapolis just as easily," he said. "Hopefully, it's a freak occurrence. I don't know. Maybe if I rode a lot around here, I would find this happens every day and maybe this is why you have a high fatality rate because motorists are just oblivious."
Clark noticed a strong will to make things better from advocates to elected leaders to government staff. If a city earns a designation as a bike-friendly city, it can help increase tourism as bike safety committee member Scott Schnappauf noted.

"They realize this is about quality of life," Clark said.

Clark did rent a car while he's been in Southwest Florida this week, but he hasn't filled up his tank yet.
He often pedaled to the various communities before his tours, as well as Fort Myers Beach, even though he didn't make an official visit.

He said he wanted to get a feel for what is needed to help these locales become more bicycle friendly.

His suggestions? "Widen bike lanes, slow down traffic and everyone will live happily ever after," he said.
Council member Janet Martin said with more Europeans moving here, they're bringing their culture, which includes walking and cycling.

Lindsay Rodriguez, a planner with Waldrop Engineering, said she sees a lot of minority bike riders in Bonita Springs.

"Minorities need to be considered, represented," she said. "We need to think of them somehow. They ride out of necessity."

When speaking with a county official on developing a partnership for redesigning Bonita Beach Road, Bonita Springs City Manager Carl Schwing remembered that person's focus being on moving car traffic.
After meeting with Clark, Schwing feels he'll be able to communicate better on what the needs are for all citizens in Bonita Springs.

"This is not a brand new thing," he said. "As (planner) Jennifer Hagen noted, there's a paradigm shift with counties or cities. Moving bicyclists and pedestrians are as important as moving vehicles.

"It's how it all fits together. There's a limited amount of space and we all need to share."


JOIN THE CONVERSATION
Go to facebook.com/sharetheroadfloridaa special page created by The News-Press for the cycling community and others to share their stories and comments about the rising crashes and deaths involving cyclists on Florida roads.