Kudos to the City of Cape Coral and the Cape Coral Bike-Ped group for the successful completion of the 90-mile bike route system!  Come to the Tour de Cape run/ride events on Jan. 17-18 to check out the new routes and signs.
Watch the NBC-2 News video story on Jan. 8th.

Cape Coral, FL. (January 9, 2015) The City of Cape Coral in partnership with Cape Coral Bike-Ped, a volunteer organization, has completed the 90-miles of 7-interconnectd bike routes in Cape Coral, Florida!  The project, completed December 2014, is on time and within budget with all design and installation work completed, as promised , by the volunteers and the City of Cape Coral’s Public Works Department.  To-date Public Works has put in 1497 Bike Route Signs.  A few additional signs will be put in as part of the Utility Expansion Project for areas 6/7, but all other signage is in.  Special thanks to Mike Swanson, a Bike-Ped and Caloosa Rider volunteer who worked tirelessly on this project. 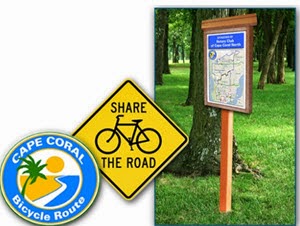 In addition, 13 sponsored map kiosks will be placed in parks along the routes within the month.  These sponsored kiosk contain the map of the 7-interconnected routes.  Cyclist will be able to scan the QR box on the map to take them to the City’s website and to each of the 7-interactive, downloadable “Ride with GPS” route maps.  If interested, there are 4 sponsored kiosks remaining at $300 each.  Contact Carolyn Conant at ceconant1024@gmail.com for information on sponsorships.

Help us celebrate the installation of the new Cape Coral Bike-Ped signage along with a spectacular ride in the Tour De Cape on January 17 and 18, 2015.  Register for the events at http://tourdecape.net/ .