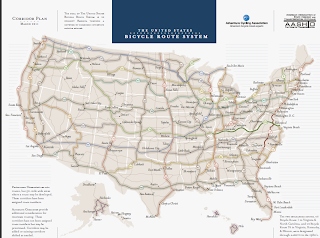 A new policy from the Florida Department of Transportation sets out four corridors for consideration to become U.S. Bicycle Routes. The four, each 50 miles wide, are described in the April 7 policy paper as:
US BR 90, along U.S. 90 from Pensacola to St. Augustine.
US BR 1, along U.S. 1 from Nassau County to Key West.
US BR 15, following the Gulf Coast from Madison County to Miami.
Alternate US BR CFG, along the Cross Florida Greenway from Daytona Beach to Tampa Bay.

An interactive map of the system may be found at Adventure Cycling, an early and very active advocate for creating the nationwide network.
Posted by Darla at 4/10/2011 06:11:00 AM