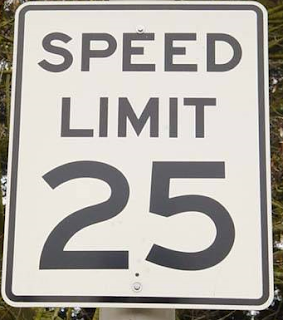 Kudos to the Fort Myers City Council for recommending that speed limits be lowered to 25 mph on city streets in order to reduce crashes and improve safety! Slower speeds mean safer streets for pedestrians and cyclists. Stay tuned for the official council vote that is expected within the next four months. Below is the article in today's News-Press:

Lowered residential speed limits are on the
horizon in Fort Myers.

A public works study presented Monday to
council ended with a recommendation to
lower speeds to 25 mph in an effort to
reduce crashes and increase safety.

The move wouldn't affect busier state and
county roads, such as Martin Luther King Jr.
and Palm Beach boulevards, though council
did suggest the possibility of petitioning the
state for lowered speeds there, too.

For now, the focus is on residential streets,
downtown roadways, and streets like Ford
that are mixed residential and commercial
use - most of which now have a limit of 30
mph. Click here to continue reading the article.
Posted by Darla at 4/05/2011 01:35:00 PM