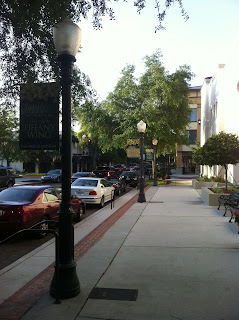 Advocates of the “Complete Streets” movement hope they are on the verge of gaining ground in Central Florida. Planners at the City of Winter Park, located north of Orlando, say they have drafted a “Complete Streets” resolution for the city. Mayor Ken Bradley is also supporting the measure which is expected to come up for a vote in about two weeks.

Dan Burden, executive director of the Walkable and Liveable Communities Institute was in Winter Park this week to discuss improvements that could be made to local roads. He says a complete street is a thoroughfare “where a person can just naturally switch seamlessly from mode to mode”. That means encompassing walking, biking, driving, and even moving big trucks down the road. Burden presented those concepts to Winter Park commissioners while in town.

Meanwhile Orlando land use attorney Rick Geller is pursuing an effort to tack “complete streets” language to a state transportation bill, while the legislature is still in session this year. He says “complete streets” are needed at the state level to set standards for local communities to emulate. It’s not clear if Geller’s language will be picked up before the session concludes May 6th, but he says he’ll back next year if it’s not.
Posted by Darla at 4/19/2011 08:13:00 PM