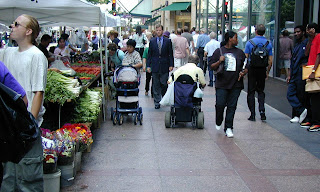 On March 11th the Transportation Disadvantaged Subcommittee of the MPO, met. Data was presented profiling the transportation patterns of the homeless population in Fort Myers. The data had been collected, as part of the census, through the office of Lee County Homeless Coalition whose Executive Director is Janet Bartos.

The vast majority of this population is white, non-Hispanic, single, non-veteran, and unemployed. All were homeless or at risk of imminently becoming so. This group was rather evenly split by gender with 402 males and 416 females.

Destinations were varied with the most frequent being; grocery store, church, and doctor. Next most frequent were; employment search, AA meetings, services such as soup kitchens, Salvation Army, Goodwill, Veterans Services, and least often - work.
Subjective commentary regarding the hazards encountered, indicated traffic, bad drivers and fear of attack of some sort to be the most frequently cited. Problems with weather and police were also frequently reported.

The last category of information solicited was commentary regarding their unmet needs for transportation. By far, the most frequently cited all centered on public transit, with the desire for bus passes being the single greatest need expressed. Next, were more routes, shorter times between buses and closer bus stops. This was followed by requests for more and/or better sidewalks.

BikeWalkLee endorses the initial gathering of this census data and a continuation of such in future years, as well as incorporation into the county’s Long Range Transportation Plan (LRTP), to be adopted by the MPO Board on May 20th.
Posted by Darla at 4/09/2011 07:14:00 AM