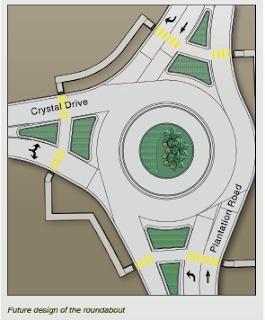 A roundabout could soon replace the stop
sign at Crystal Drive and Plantation Road in
south Fort Myers.

To push forward what would be the third
roundabout in unincorporated Lee County
will require a buy-in from a skeptical
public.....

The angle of the designed roundabout
would force cars from all directions to slow
upon entering the circle, giving oncoming
traffic a chance to merge, said Bill
Baranowski, an engineer in Utah and the
founder of Roundabouts USA, an advocacy
group for the traffic feature. Because traffic
never stops, delays are cut down. And
because cars are slowed in the circle,
accidents seldom mean injuries.

Lee County in the past decade put in a
roundabout in Lehigh Acres and another in
Estero. Sarah Clarke, a project manager
with Lee County, said she has heard of no
complaints about those roundabouts.

The statistics largely favor roundabouts for
safety. The Insurance Institute for Highway
Safety 10 years ago studied 23
intersections that were converted into
roundabouts. Accidents with injuries
dropped 80 percent, while crashes
dropped by 40 percent....

"Roundabouts are more and more
becoming part of our tool bag," Baranowski
said. "Now they're so commonplace, they're
not considered a fad anymore."