Smart Growth America released a groundbreaking report today documenting the importance of walkable downtown neighborhoods and transit to attracting businesses downtown.  The 2 hour kick-off webinar (click here) with business leaders from many companies and cities was excellent and worth watching, too.  Lots of lessons for SWFL in terms of economic development strategies.  Download the report. 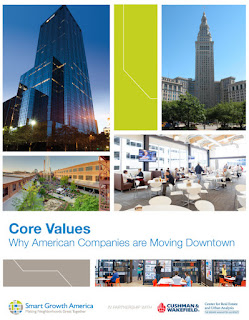 Why are companies choosing these places? What are the competitive advantages they see in these locations? And what features do they look for when choosing a new location?

Core Values: Why American Companies are Moving Downtown examines the characteristics, motives, and preferences of companies that have either relocated, opened new offices, or expanded in walkable downtowns between 2010 and 2015. Smart Growth America partnered with global real estate advisors Cushman & Wakefield to identify nearly 500 companies that have made such a move in the past five years. Of those, we interviewed representatives from more than 40 companies to gain a better understanding of this emerging trend.

The research reveals an enormous diversity of businesses choosing to locate downtown. The companies included in our study represent over 170 specific industries, including 15 software developers and 29 information technology companies, 45 manufacturers, 11 universities and colleges, 7 food production companies, 6 advertising agencies, and 6 oil and gas companies. The group includes 52 companies on the Fortune 500, and 12 of Fortune’s “100 Best Companies to Work For” from 2015. And these companies are of all sizes, from just a few employees to thousands.

Their investments have taken a variety of forms. Our study included relocations, consolidations, expansions, as well as the creation of new offices or companies. Of the nearly 500 companies included in our investigation, 247 relocated from a suburban location (either within the metro area or from a different region), 92 opened a new downtown location or branch, 73 relocated within downtown, 41 expanded existing downtown office space, 20 consolidated a suburban and downtown location, 10 moved from a different downtown, and 9 were brand new companies.

This trend is visible across the country, in big cities and small ones, in the middle of the country and the coasts, as well as in secondary markets within larger metropolitan areas. An online interactive map includes more information about where in the country these moves are happening.

We also explored the motivations for these companies’ moves. Smart Growth America conducted interviews with senior-level employees at these companies to understand why they chose the location they did. In the course of our interviews six common themes emerged explaining why companies chose to locate downtown:
Common themes also emerged about what companies looked for when choosing a new location. Many interviewees said they chose vibrant, walkable neighborhoods where people want to both live and work. Companies also wanted their new location to be accessible by a range of transportation options, emphasizing in particular commuting choices for their employees as well as convenient access to the rest of the city and the region. Great office space was another important factor for these companies, and many highlighted renovated warehouses or other unique and inspired architecture that dovetailed with a desire for similar neighborhood qualities. Companies noted that a warm welcome on the part of the city—whether through outreach, a personal welcome, help with permitting, or financial incentives—also factored in to their decision making process. And finally, companies noted that a clean, safe downtown was a fundamental requirement for their choice of where to move.

Cities, for their part, can learn from this. Understanding what companies look for and why should help local leaders understand how they can compete more effectively for these businesses. Smart Growth America is dedicated to helping communities across the United States create these kinds of places.