Bonita Springs' recently approved (Council 5-1 vote at May 6th meeting) innovative downtown improvement plan, that has been under development for over a year, has now been reopened again for public input.  The City has committed $16 million to this downtown improvement project along Old 41 from Terry Street south to Oak Creek Bridge.  The planned improvement includes sidewalk and bicycle connectivity, drainage, landscaping, utility relocation, parking, streetscape, and two roundabouts, i.e., many features of a complete streets approach.  The City's stated goal for the project is to attract businesses to downtown Bonita and promote urban infill development.

At the June 3rd Council meeting, based on concerns raised during public comment, Council voted (4 to 2 vote) to reopen the approved plan and hold a special workshop (in addition to the two recent public workshops that have already been held) to provide another opportunity for input. It's important that interested citizens and advocates for these innovative approaches participate in this workshop. 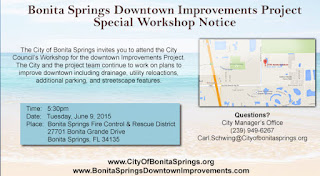 City June 5th Announcement re: Special Workshop
"The Mayor and City Council will be meeting in a workshop session to receive and understand any and all questions regarding this project and its components.  Representatives of the City's design/build contractor as well as your elected officials will be present to interact with citizens, businesses and property owners regarding this important project before final designs are completed."

Background
In December 2014, BikeWalkLee presented the Bonita Springs City Council and staff with its "2014 Complete Streets Champion of the Year" award for its embrace of a comprehensive complete streets approach, which culminated in its October 2014 adoption of a complete streets policy.  The award recognized several actions taken by the Council in support of complete streets and livable communities, including the design of this downtown improvement project.  BikeWalkLee's Dec. 3rd press release made the following statement about this project:

"The integration of complete streets concepts in the downtown redevelopment project recently awarded to a consultant team for design and construction. The design for this project holistically incorporates complete streets and livable community concepts in a visionary way ― from safe walking and biking facilities, to roundabouts, on-street parking, attractive streetscape designs, innovative storm water treatment, to creating attractive public spaces that will draw people and investment to a vibrant downtown."

This project does represent change and change can be difficult; however, any visionary plan will involve change. As Public Works Director Matt Fenney was quoted as saying in an April 17th NDN article, "It's certainly a lot of change, but we think it's the right change."


For example, with respect to roundabouts (one of the innovative approaches in the Council-approved plan), FDOT District 1 Secretary Billy Hattaway recently told both the MPO Board and the Bonita Springs City Council that there is often opposition to roundabouts from businesses and the public before installation.  According to Secretary Hattaway, 75% of the public is opposed to roundabouts before installation, and as soon as the roundabouts go in, it flips to 75% in support of them!  He said that opposition is based on fear of change and the unknown, but encouraged elected officials to educate the public about the benefits of these new treatments and use success stories from other communities to demonstrate that the end result is likely to be supported by them once its completed.  One suggestion has been to encourage those involved in the debates--from elected officials, business and community leaders--to visit nearby communities such as Sarasota to see their successful downtown improvement projects (with many of the same treatments proposed for Bonita) and talk to the business community about their experience with these new treatments once they've been installed.

Below are links to articles about this project as it has progressed through the process:


(This in-depth article provides extensive information about the various features of the project and their potential benefit in terms of walkability, safety, economic development, etc.)