News-Press June 14, 2015 Political will is needed to make cycling safer

By Janine Zeitlin and Laura Ruane

That's total miles in the shared-use path system on Sanibel Island. The number actually outstrips beachfront — 15.5 miles — on an island renowned for its quality of life for residents and allure to tourists.

More links are planned, including a half-mile-long, paved shared-use path to connect Bowman's Beach Park with the path along Sanibel-Captiva Road.

It's little wonder the League of American Bicyclists in 2010 named Sanibel the first "bicycle-friendly community" in Southwest Florida.

The achievements took more than 30 years. And, they started with a small group of worried moms, including Mariel Goss.

Goss reared four children on the island, including Sanibel City Councilman Chauncey Goss. She also is married to Porter Goss, who was Sanibel's first mayor, and who went on to national political fame.

By the early 1970s, a building boom enveloped the island. With it came construction dump trucks "zipping down Periwinkle Way," Mariel Goss said.

"It was pretty dangerous. We ended up driving (the children) everywhere."
Until the bike path.

The moms formed the Sanibel Bike Path Committee in 1972. They set out donation jars at island businesses, and created Sanibel and Captiva phone books, whose sale proceeds went to the cause. They held a bike rodeo at Bailey's General Store.

To draw attention to the road hazards, Mariel Goss and more than a dozen other women held a "ride-in," pedaling "down the middle of Periwinkle in the middle of the morning."

The first 2.5 miles of Sanibel's path along Periwinkle Way was built in 1976, thanks to the private fund-raising and a state transportation grant.

"The grandchildren – oh, my gosh: When they come to visit, the paths are fabulous," Mariel Goss said."I am so pleased. The bike paths have made Sanibel a family place."
[Note: photos added by BWL, not from News-Press] 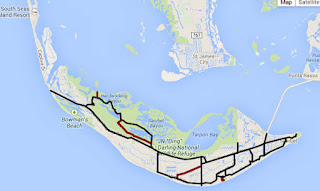 THE NEWS-PRESS
Florida bike crashes: 7 things that may shock you