SWFL Critical Mass meets on the first Friday of each month to enjoy a beautiful, family-friendly evening ride through downtown Fort Myers and surrounding neighborhoods. On our ride last Friday, the 200+ riders also enjoyed an escort from the Fort Myers Police Department along the circuitous twelve mile route. 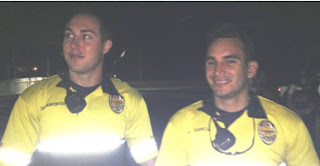 Because riding into or out of downtown requires travel on major thoroughfares such as McGregor, traffic has to be stopped to allow such a large group to pass safely. Typically, trained volunteer riders have been positioned ahead of the group to do this, and while 99% of all drivers are graciously accommodating, there has been an occasional negative response.

But, all when smoothly last Friday with the FMPD Officers Carpenter and Garcia on the job!
Not only did the Critical Mass group have the police escort, but due to months of work by the City’s Public Works Department we were able to virtually glide along the many newly paved roadways throughout the neighborhoods, including the (almost totally) finished Cortez Ave.

All of us extend a big ‘Thank You’ to the City of Fort Myers and invite everyone to join these totally fun rides celebrating the joys of cycling. The First Friday of each month, we gather in the empty field next to the downtown Publix at 2160 McGregor Blvd and with helmets on and front and rear lights ablaze, head off at sunset.