Mayor Marni Sawicki attended the US Conference of Mayors conference in Washington in January and heard USDOT Secretary Anthony Foxx's launch of the Mayors Challenge and came back with a plan for the City of Cape Coral to be part of this national initiative focused on improving safety for people walking and biking.  Yesterday, with the support of the City Council and staff, Cape Coral made it official.  BikeWalkLee would like to thank Mayor Sawicki, Councilmen Jim Burch and Rick Williams for their leadership role, along with staff support from Steve Neff (who will be the team leader) and Persides Zambrano; and support from the Cape Coral Bike-Ped group.  BikeWalkLee is delighted that both cities have joined the campaign and is hopeful that the City of Fort Myers will be joining the effort shortly. 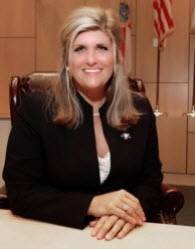 For the Cape, this initiative provides a way for the City to implement the MPO 2013 Bicycle Pedestrian Safety Action Plan that each jurisdiction is responsible for implementing.  It is also an opportunity to bring together and elevate the many activities underway in Cape Coral to improve safety.  Bike/ped safety took center stage in Cape Coral in 2014 as a result of several tragic bike/ped fatalities involving teens, which galvanized the community, with calls for action by elected officials, agencies, and law enforcement to make it safer for pedestrians and cyclists, esp. school age children.

As a result, Cape Coral has many initiatives underway to make its streets safer:

The January visit by the Steve Clark, the national Bicycle Friendly Community (BCF) expert, spurred the city in partnership with Cape Coral Bike-Ped (CCBP) to begin the process of developing an application for Bicycle Friendly Community designation this summer.  At the same time, the MPO-funded development of a Bicycle and Pedestrian Master Plan for Cape Coral gets underway this Spring.  A complete streets approach is a common thread across the BFC application, the Master Plan development,  and this new Mayors Challenge for Safer People and Safer Streets.  We are hopeful that one of the first actions Cape Coral takes as it moves forward to implement this Challenge is to adopt a complete streets policy.

See the earlier blog for background on the Mayors Challenge.