Mark your calendars to join the monthly (1st Friday evening of every month) fun family ride through Fort Myers with SWFL Critical Mass. [Note: Photos here were not included in the News-Press article due to space constraints.]

BWL Column in News-Press 3/5/15 "Go Coastal" section
This Friday night, Southwest Florida’s bicyclists have a chance to show off some strength — and enjoy a fun family ride at the same time. 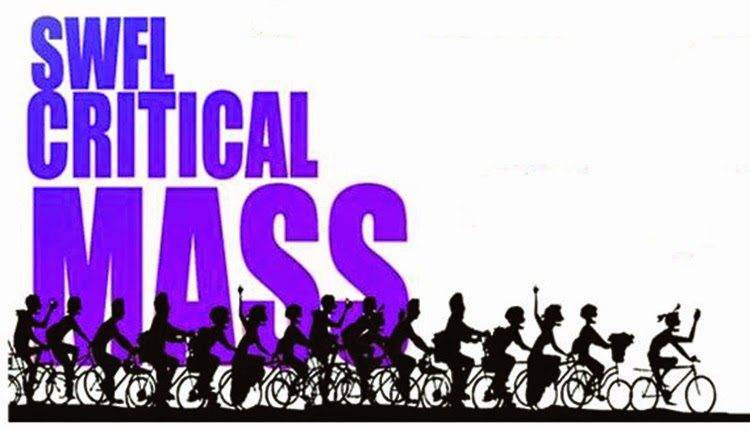 The ride is the monthly SWFL Critical Mass ride, which coincides with downtown Art Walk events. The strength is in the numbers who show up — a way to correct the doubters who scoff at the rising demand for rideable roadways and other bike/pedestrian infrastructure.

Anyone who’s been on a bike lately knows there are more people riding these days — for fun, fitness and transportation, among other reasons. But (unlike motor vehicles) counting bicyclists is no easy task — and if you don’t have the numbers, then to some public officials you just don’t count.
But making a bike/ped presence is hardly the only reason to join the ride Friday. You should do it because it’s just plain fun. 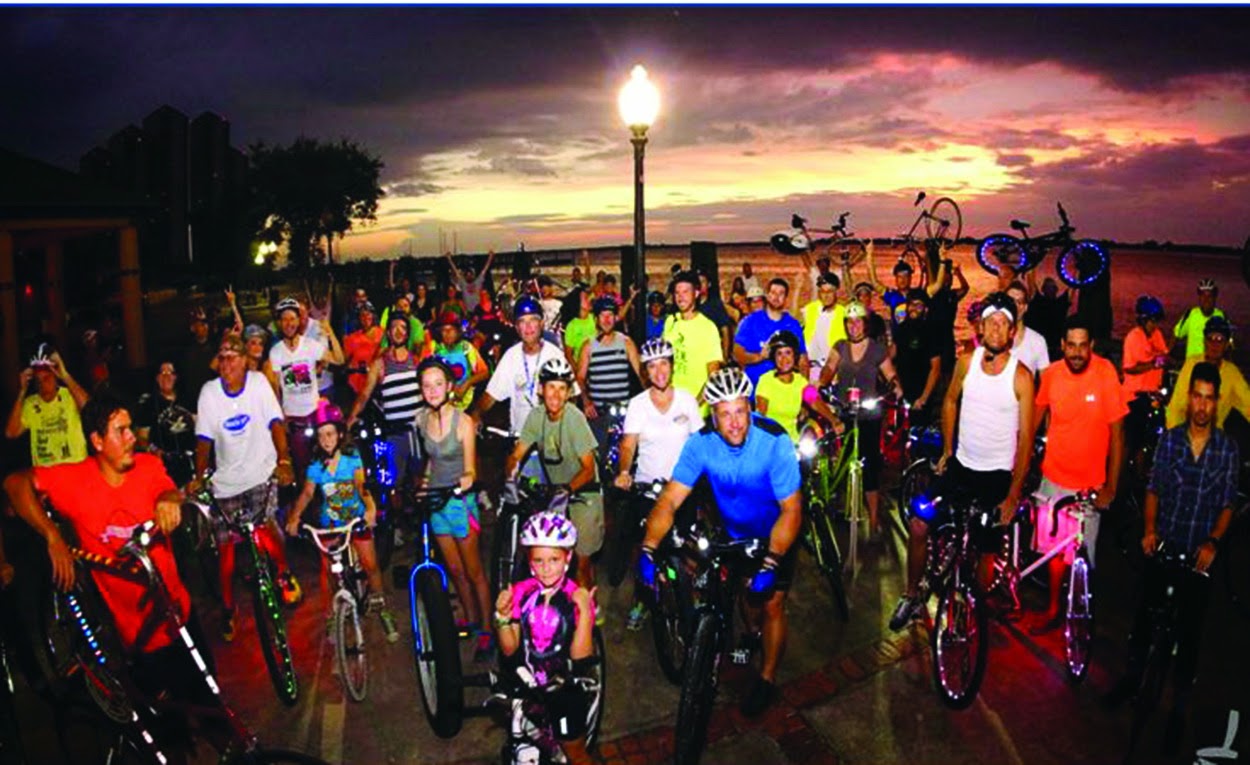 •It’s slow: The pace is 8-10 mph, an easy ride for most of us, with leaders and others keeping an eye on the proceedings.
•It’s short: 11 miles, with a break in the middle — again, within the abilities of most.
•It’s safe: Lights are mandatory (and part of the fun, since some of the cyclists go beyond the typical headlight/tail lights into full-on decorations), helmets are (strongly) recommended, and a few other simple suggestions (read: rules) keep the overall pedaling parade sane and secure. (Remember: You ride at your own risk… just like the rest of your life.)

Safety (like strength) also comes from numbers — in this case, more than 100 (hopefully, a lot more!) gliding through the streets of downtown Fort Myers, a group that will get the attention of even the most inattentive motorists (who will also have a passel of pedestrians to watch out for as well). Art Walk always draws a crowd even in the summer months — so at the height of season and on what promises to be a delightful spring night, the streets and sidewalks will be saturated.

“In August 2013, after having ridden on many large group rides, I felt the need to begin an all abilities group ride to Southwest Florida,” said Rob Seibert, SWFL Critical Mass organizer. “The independent and unaffiliated SWFL Critical Mass group was created as a ride of positive spirit and of fun — something that brings people together in common enjoyment. It’s a mental break for each of us, free of worries (i.e. drop the politics, the work stresses, silly race concerns, or concerns for who’s rich or poor). Since that time, our group numbers have continued to grow — not as quickly as I would have liked, but that’s just me.” 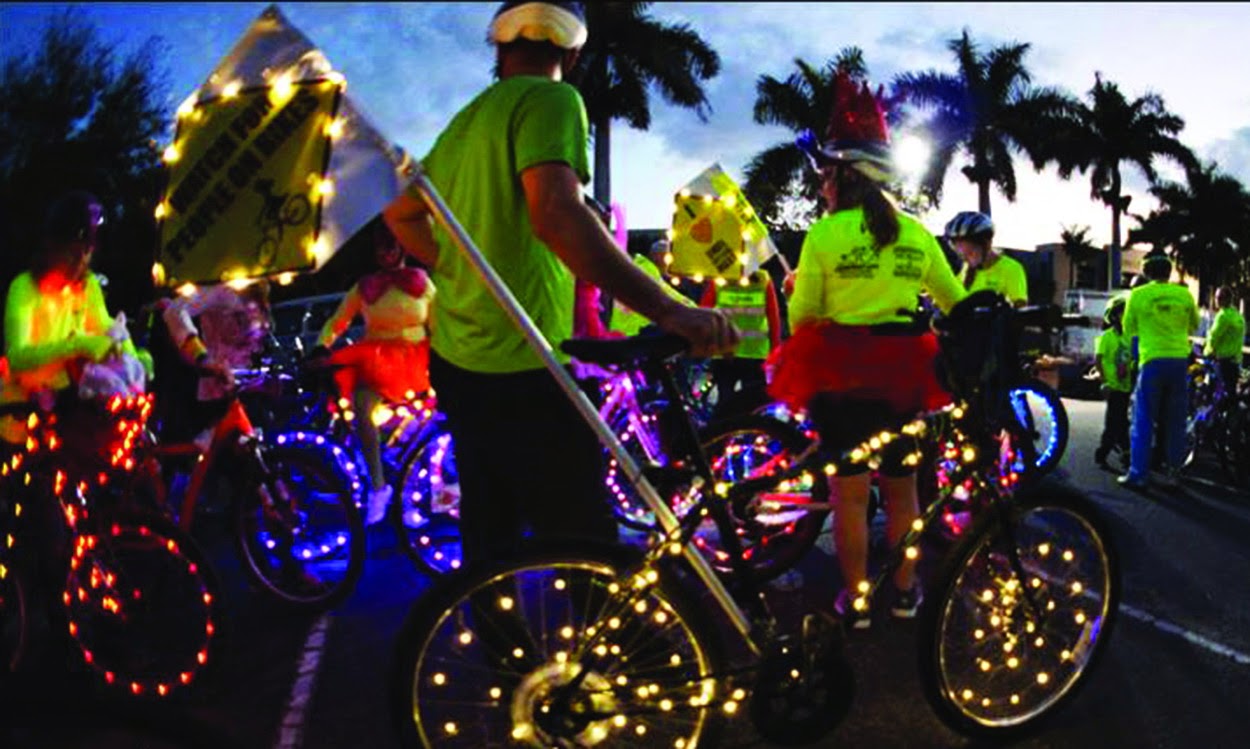 “What better way to boost awareness than by bringing a smile to thousands of onlookers?” Seibert continued. “Our recent message at last month’s Edison Festival of Lights parade was to humanize cyclists: We are people, we are family members, and we are here on bikes. The message was delivered not with those words, but with what the riders wore on their backs as they slowly rode the parade route.” 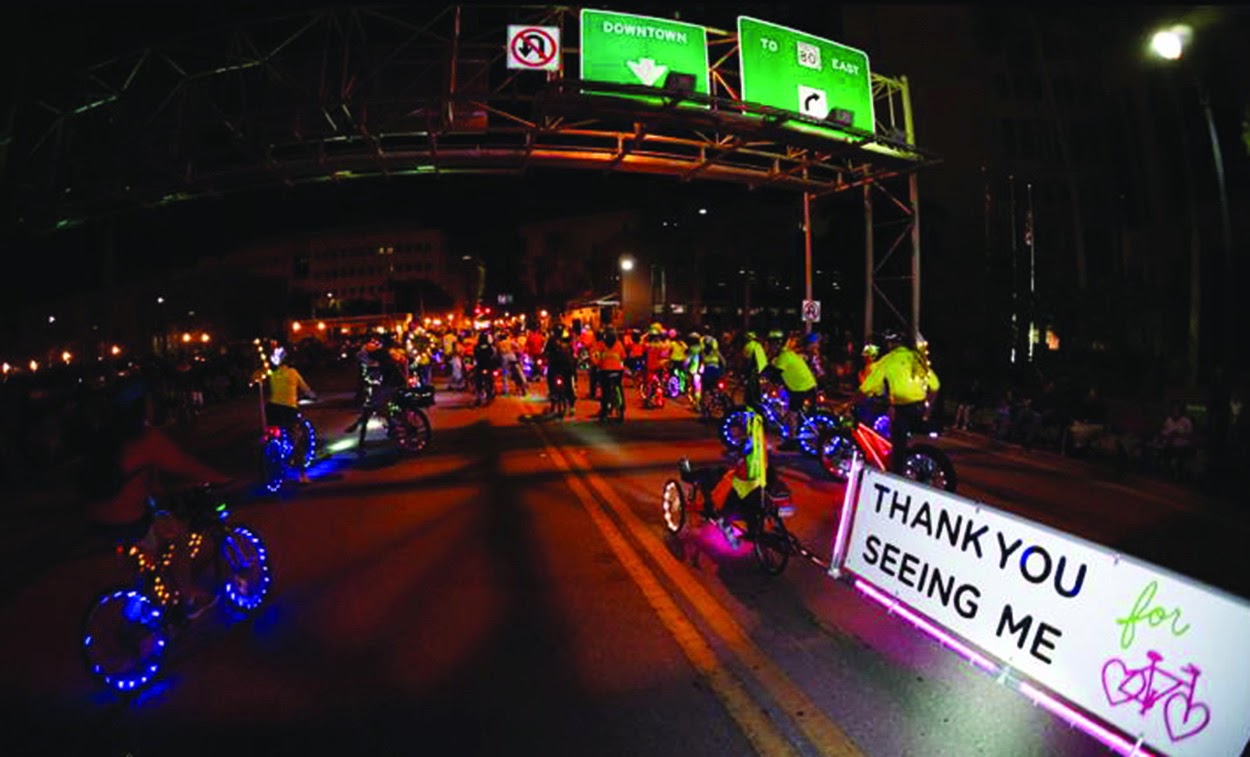 A final note about strength in numbers: Strong cycling showings such as the Critical Mass rides not only offer riders fun, they show just how many people are committed to cycling (and safety). A bevy of bicyclists heading down a street is a pretty graphic example of how local cycling has achieved the kind of “critical mass” that justifies more investment in facilities and integration into the local transportation system.

Be part of that strength. The ride meets up at 6:45 p.m. on Friday at the empty lot next to the Publix center on West First Street. Grab your bike (with lights and helmet, of course), bring along family and friends, and join the fun.