At the 4/18 MPO Board meeting, the MPO Director, Don Scott provided the monthly status report to the Board on implementation both of these items.  Scott provided the timeline for the two TIGER RFPs (see blog post: March 28,2014 TIGER grant implementation moves forward: First of two RFPs issued by Lee MPO.  He also discussed the performance measures that will be used for measuring the success of this project.  Mayor Ruane asked the staff to provide a timeline and milestones for all the tasks in TIGER implementation, with identification of where policy decisions may be needed by the Board.

With respect to implementation of the BPSAP, Scott reported on the trends in bike and pedestrian fatalities and injuries, presenting the following graphs with data through March 31, 2014: 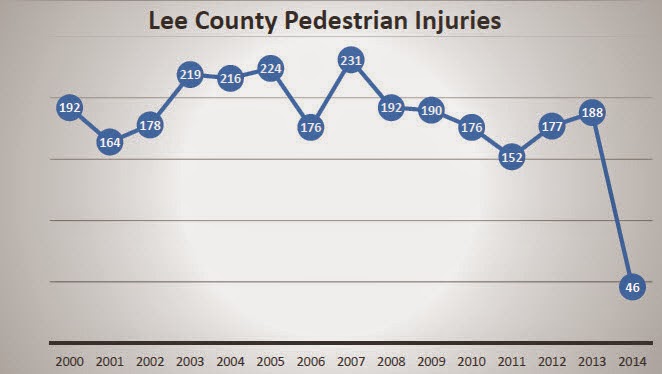 Scott also reported that the bike/ped "Road Safety Audits" called for in the BPSAP on four high crash corridors are now getting underway by FDOT and their team.  The corridors targeted are: Six Mile Cypress and Colonial Blvd; US 41 and Six Mile Cypress; SR 80 and Marsh Ave; and SR 78 and Santa Barbara Blvd. 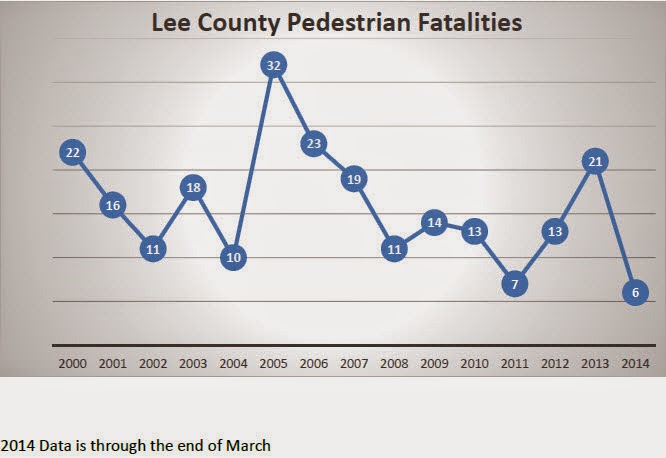 BikeWalkLee Comments and Board Discussion
BikeWalkLee's representative Darla Letourneau spoke on the safety issue after Scott's presentation, urging the elected officials to make bike/ped safety a higher priority and provide collaborative leadership. The value of our local jurisdictions working together was recently demonstrated in the team of five mayors who provided collaborative leadership on water quality issues, and Letourneau urged the mayors to use this same kind of approach for bike/ped safety.  Letourneau commented that as she was researching best practices around the country over the past week in anticipation of  the first meeting of BPCC's safety working group, she was struck by two common elements of successful communities:  how involved the elected officials were in the bike/ped safety campaign; and the importance of having a broad coalition of stakeholders at the table in the campaign.

Letourneau outlined some of the actions that BikeWalkLee is taking to educate the community through our communication channels, including using our  biweekly column in News-Press in "Go Coastal" section.  Several recent columns have focused on what walkers and cyclists can do to be safer road users.  Dan Moser's biweekly column in Florida Weekly Outdoors section also hammers on safety issues. FDOT District 1 has also made bike/ped safety a top priority and is offering assistance as well as grant resources.

Letourneau closed her comments by saying that this isn't just about bike/ped safety--it's about the safety of all road users and Lee County's track record on traffic safety is abysmal.  Addressing the most dangerous behavioral problems by drivers-- distracted driving, DUIs, speeding, road rage, hit and run crashes--will save the lives of other motorists, not just pedestrians and cyclists. 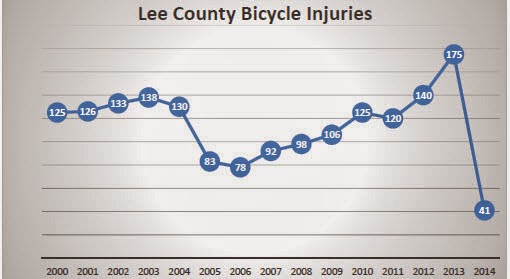 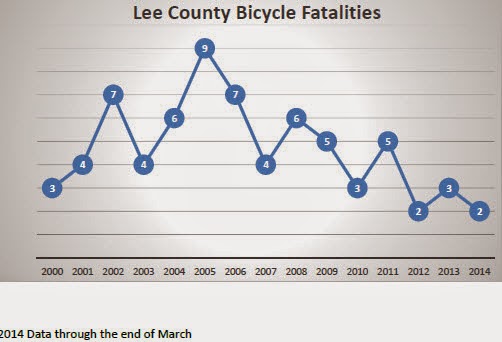 MPO Board members expressed interest in knowing how our bike/ped injuries and fatalities compare with usage, with Scott responding that the rates we use are based on population since we don't have usage numbers.  Other members were interested in getting backup data on where the crashes are happening in their jurisdictions, which staff will provide.  Fort Myers members suggested that there may be a need for more crosswalks on some of the major roads in Fort Myers, such as MLK and Palm Beach Blvd.

In the afternoon of April 18th, the MPO's Bicycle Pedestrian Coordination Committee (BPCC)'s newly formed safety working group met to review crash reports for the Del Prado and US 41 corridors with the goal of coming up with a way to categorize the crash details and causes that can then be used to identify countermeasures that could be implemented in those locations to improve safety.  Based on those discussions, staff will prepare maps of all the crashes on those two corridors over the past six years and will develop a matrix of how to categorize those crashes prior to the next meeting of the working group.


The working group is looking at the Boston Cyclist Safety Report--2013, along with other national resources, for ideas about the approach, methodology, and ways to communicate with the general public for implementation of the Lee County Bicycle Pedestrian Safety Action Plan.