On April 8th, BikeWalkLee sent a letter to County Commissioners asking them to instruct staff to restore the $500,000 in LeeTran cuts in the county's "baseline cotinuation budget" for 2014-15 before the draft budget is submitted to the Board for consideration in May.  BikeWalkLee also presented this request at the County Commission's April 15th regular meeting, during public comment period on items not on the agenda. 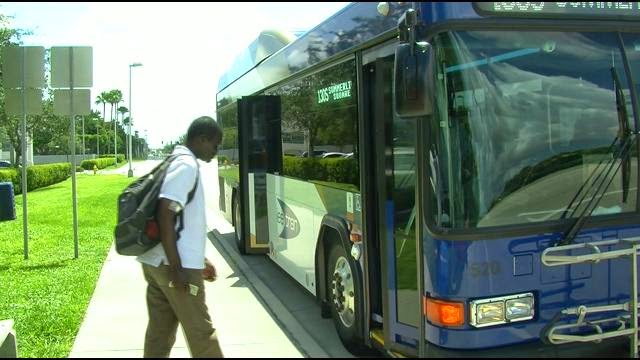 Over the past year, BikeWalkLee has repeatedly expressed its concerns about cuts to LeeTran’s services. We were pleased to hear Commissioner Hamman's suggestion at the April 1st BoCC meeting that the Board consider restoring the LeeTran service cuts. We support that approach and ask that you instruct staff to restore the $500,000 in cuts in your baseline continuation before the draft 2014-15 continuation budget is presented.
While we would prefer that the cuts be restored as soon as possible, it appears that the consensus of the Board is not to reverse any budget cuts during the year. However, the Board should take action now to ensure that these core services are included in the baseline of LeeTran's budget for next year.

As you know, as part of last year’s budget process, the Board cut LeeTran evening and weekend services effectively in half, extending intervals between buses to as long as two hours. These service cutbacks were intended to save $500,000 in LeeTran’s budget; however, the county lost an equal amount of matching grant funds and is now losing ridership and fare revenues. As a result the “savings” are actually costing the county money.

At the time these cuts were made, the Board clearly stated its intent to closely monitor the impact of these cuts. We now have evidence of the negative impact these cuts are having on the transit system overall and on individual lives of our citizens who rely on transit to get to work and lead independent and productive lives. Since the cutbacks went into effect in mid-November, ridership numbers have fallen for the first time in years. This was after several years of record-breaking increases in ridership. In the January 2013 to January 2014, year to year comparison ridership was down 8.5% and February’s year to year comparison showed a ridership decrease of 2.2%.

These service cutbacks are representative of the real impacts of service cuts. The system has become a less reliable means of travel to work or other essential destinations. Two hour intervals between buses are simply not a viable mode of transportation. Research shows that the functional viability of any transit system hinges on two primary qualities: 1) punctuality or reliability; and 2) the waiting time between buses (or headways). The enormous headway extensions after 6 p.m. and on Saturdays caused by the LeeTran service cutbacks have weakened the entire transit system.   The longer these service cutbacks are in place, the more damage is being done to the long-term viability of our transit system.

Rather than subject yourselves to another bruising battle with citizens over this small but enormously harmful budget cut, we urge you to take this controversy off the table now. You can do this by restoring these services in the baseline of the continuation budget for next year.

Thank you for considering our views and your continued support for important Lee County services.