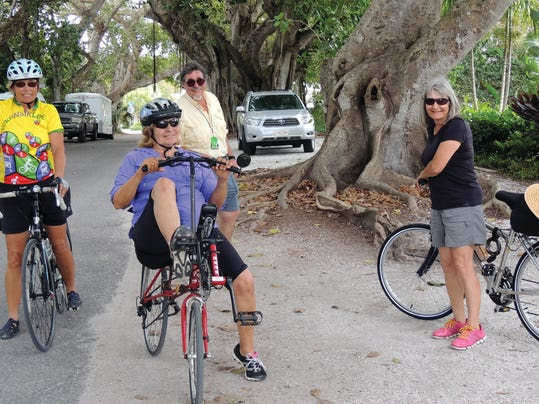 Are you looking for a ride away from the bustling crowds? There’s a gem of a ride just for you about an hour north of downtown Fort Myers.

Two rails-to-trails bike paths are now connected, offering you a 33-mile round-trip bike ride from the Cape Haze Pioneer Trail Park in Charlotte County to Boca Grande in Lee County. Be sure to bring your water bottle, wear sunscreen, wear your helmet, bring some snacks (but plan on lunching at one of the island’s outdoor eating spots… Loose Caboose is a favorite), and bring $5 in singles.

The Cape Haze Pioneer Trail trailhead at the intersection of SR 776 and CR 771 is a small park, with ample parking (and free restrooms), and includes the historic Placida bunk house, which was built by the railroad to house its employees, along with a modern red bike sculpture. A group of citizens formed Friends of the Cape Haze Pioneer Trail in 1995 to raise funds for the creation of the trail, with construction beginning 10 years later.

The Cape Haze section of the trail, initiated by the Friends of the Cape Haze Pioneer Trail in 1995 and constructed from 2005-2009, is eight miles long and runs through quiet coastal flatlands of pine trees along the former railroad corridor, through Rotunda West and over the Coral Creek.

The Cape Haze trail abruptly ends at the Boca Grande Causeway intersection. There’s a traffic light at this three-way intersection but no crosswalks and no signs pointing you to the Boca Grande path (it’s to the left). It’s a tricky intersection, so be very careful. There are no bike lanes leading up to the bridge ahead, but traffic is fairly slow approaching the tollbooth.

Going over, bikes have to stop to pay a $3 toll for bicycles (cars are $6) so come prepared with three singles that are easily accessible.

The old section of the drawbridge doesn’t have bike lanes or shoulders, so ride carefully; cars go slowly so it’s not too bad. The bridge is under construction, and the new section attempts to accommodate bikes on the shoulders, but the drainage grates make the shoulders a bit tricky. Once you get over the Causeway, there are bike lanes in most sections leading up to the island path system.

In total, there is about a mile of on-road biking with some tricky sections in slow and light traffic.

You enter Boca Grande, the quiet Lee County island home to an elite resort as well as a funky fishing village. The Boca Grande rails-to-trails 6.5-mile path has been there for 29 years and is privately owned and maintained. Back in 1982, du Pont heir Bayard Sharp (who owned Gasparilla Inn) saw the need for a bike path after one of his employees was killed biking on the island. He bought the right-of-way on the abandoned CSX rail line, and raised funds to build the path, creating the first rail-trail path in Florida, which opened in February 1985. It was built primarily for bicyclists and pedestrians but can also be used by golf carts (since it is privately owned and managed).

Once you hit the path system, it’s smooth sailing. Bike along the path down to the village and park your bikes (lots of bike racks) and explore the shops, have lunch, an ice cream cone or soda. Then head on down to the tip of the island and visit the famous Gasparilla Island State Park and its iconic lighthouse. This is where you need your remaining $2 for entrance to the park (the bicycle rate). It’s worth it to walk out to the wide beach on the Gulf and admire the lighthouse.

On your ride back through Boca Grande, be sure to take a couple of detours to see two special spots on the island: the Gasparilla Inn, and the nearby residential Banyan Street, where there’s a beautiful canopy of old banyan trees. The way back to the Cape Haze Pioneer Trail trailhead park is the same way you came, so just retrace your steps, which will make for a round trip of 33 miles.

The fun day trip is another reminder of the importance that visionary citizens, both in Boca Grande and Cape Haze, played in creating these rails-to-trails pathways — a familiar phenomenon in communities across the country. Say a quiet word of thanks and be inspired to champion a path or other biking and walking facilities in your own community.

— BikeWalkLee is a community coalition raising public awareness and advocating for complete streets in Lee County—streets that are designed, built, operated and maintained for safe and convenient travel for all users: pedestrians, bicyclists, motorists, and transit riders of all ages and abilities. Information, statistics and background at BikeWalkLee.org.


Getting there: Take I-75 north and get off at Exit 170 (toward CR 769 S/Port Charlotte). Turn left onto Kings Highway, then right onto Veterans Blvd. until you reach CR 771 and SR 776. Then turn left onto Gasparilla Road. The trailhead begins just south of the intersection of SR 776 and CR 771.


Other Photos from the ride (not in News-Press article):