On April 16th, the Alliance for Biking and Walking (one of BikeWalkLee's national partners) issued its 2014 "benchmarking" report on bicycling and walking in the US.  It's filled with tons of data and research on all 50 states, along with 52 of the most populous cities.  Here's a chance to learn what's happening around the country and see how Florida is stacking up against other states.

The Alliance produces the Benchmarking Report every two years in partnership with the Centers for Disease Control and Prevention’s Healthy Community Design Initiative. The goal: to comprehensively examine bicycling and walking transportation across the U.S. and how these trends relate to public health, safety, and social and economic well being. Benchmarking is a particularly helpful approach to active transportation issues because it allows comparison among states and cities while also measuring national trends. The report looks not only at bicycling and walking levels, but a suite of related trends, like crash fatalities, weekly physical activity, transportation costs, air quality, and economic growth.

Biking and walking are becoming increasingly popular in the United States. But how does Florida stack up against the rest of the country? Where is the most growth happening, and why? 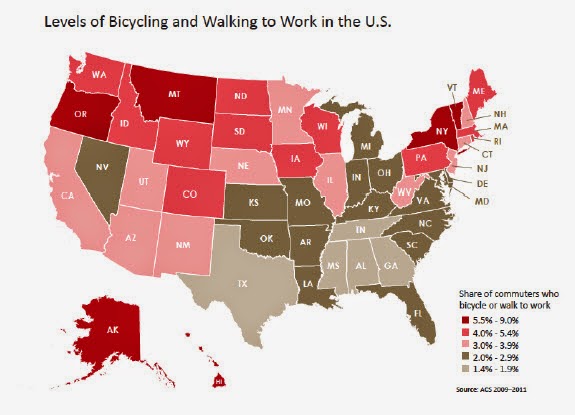 A new report from the Alliance for Biking and Walking examines the hard data behind the growing movement for more bicycling and walking – and finds that Florida ranks:

The report also evaluates states in terms of whether they have published goals on four measures:
It was surprising to learn that Florida has goals for all these categories EXCEPT a goal to increase biking!

Bicycling and Walking in the United States: 2014 Benchmarking Report collects and analyzes data from all 50 states, 52 of the most populous cities, and – new to the 2014 edition – 17 small and midsized cities. The report traces the rise of walking and biking and explores its connection to health issues like obesity and diabetes. 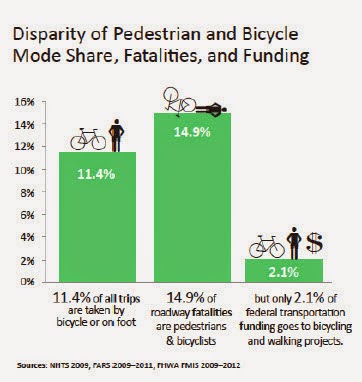 Available in full color, Bicycling and Walking in the United States is an invaluable resource for policymakers, planners, and advocates working to establish, test, and defend initiatives that promote biking and walking.

Bicycling and Walking in the United States: 2014 Benchmarking Report was funded by the Centers for Disease Control and Prevention’s Healthy Community Design Initiative, AARP, and the American Public Transportation Association. Print copies will be available from Island Press on May 15, 2014.