A very deadly week for pedestrians in Lee County

Over the past 8 days, there have been 4 pedestrian fatalities in Lee County and one in nearby Collier County.  It's a very troubling and tragic situation that needs to be investigated and actions need to be taken to make our community safer for pedestrians and cyclists.  Today's News-Press story reflects on all the recent fatalities and quotes BikeWalkLee's Dan Moser.  We are also pleased to see the Estero Council of Community Leaders (one of BWL's partners), take action on Friday to urge traffic officials to make the US 41 Estero intersection safer.  To keep track of the breaking news on pedestrian and bicyclist fatalities and injuries, follow BikeWalkLee's Facebook page. 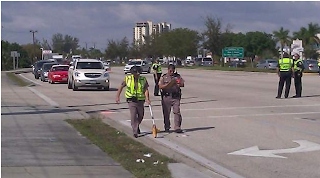 A 62-year-old Illinois man struck and killed today by a car in south Fort Myers is the fifth pedestrian fatality this month in Lee and Collier counties.

Edward Eberspacher of Shelbyville, Ill., was crossing U.S. 41 at the intersection of Jamaica Bay Boulevard when he walked into the path of an oncoming car, according to the Florida Highway. Troopers responded to the crash just before 1 p.m., and Eberspacher was pronounced dead at the scene, the FHP said.

The driver, a 66-year-old Massachusetts man, and his 65-year-old female passenger were not injured.
Friday’s crash is the latest in a recent string of pedestrian fatalities. A Naples man was killed Thursday while walking in the roadway in Golden Gate Estates in Collier County. On Wednesday, two pedestrians died in unrelated crashes: an 87-year-old woman was hit by a Corvette in south Fort Myers, and a 44-year-old man was struck on the side of the road after a two-car accident in Cape Coral. On Feb.1, an Estero High School student was killed while crossing U.S. 41 in Estero.
Dan Moser, a founding member of street safety coalition BikeWalkLee, said he thinks the answer is stricter penalties for drivers who hit and kill pedestrians. Drivers rarely face charges in such crashes unless they are drunk or driving on a suspended license, he said.
“They’re sending a message to drivers that we own the road and anyone else who is in it is at their peril,” Moser said.

As an example, he cited the eight-month long FHP investigation of Tracey Kleinpell, who was killed while bicycling on the Sanibel Causeway. A truck veered across the road and knocked her off the bridge and into San Carlos Bay. FHP has not yet determined whether charges will be filed.

FHP reports did not disclose whether charges had been filed in any of this month’s fatalities.
Lee County sheriff’s Deputy Vernon Tyus said the influx of snowbirds and tourists this month likely contributed to the high number of pedestrian deaths. Visitors are more likely to be distracted than locals while driving because they are unfamiliar with the area, he said.

The sheriff’s office includes safety tips in the daily traffic updates posted on its website, and deputies teach safe driving classes to teens and seniors to try to prevent accidents, Tyus said.
One of this month’s fatalities may end up making the roads a little safer.

Responding to the death of Danielle Chapman, the 17-year-old Estero High School student who died last week crossing U.S. 41 at Sweetwater Ranch Boulevard, the Estero Council of Community Leaders on Friday unanimously approved a resolution to pressure county traffic officials to make that intersection safer.
The resolution calls for the addition of a crosswalk, changing a flashing yellow light to a red light and reducing the speed limit from 55 mph to 45.

Any changes must be studied and approved by the Florida Department of Transportation.

In May 2007, 46-year-old pedestrian Maria Parsons was struck by a hit-and-run driver at the same spot. From 2006-11, five major crashes at the spot were reported.
“We’re trying to protect the people crossing the road,” said Daniel Chapman, Danielle’s father, who spoke at the packed meeting Friday. “It’s hard to keep fighting because I miss my daughter so much, but this is what she would have wanted me to do.”