NBC2 News just aired a spotlight on the Daniels Pkwy road reconstruction progress as it relates to drivers and wondering when the third lane would be paved and the project completed.  They missed an opportunity to also report on the status of the sidewalk path that runs in front of jetBlue Park and how that affects alternative forms of transportation such as for bicyclists and pedestrians.

It’s nice to see that LeeDOT officials have responded to our concerns about the condition of the sidewalk/path on the North side of Daniels Pkwy, as reported on just one month ago.  Hundreds of feet of the sidewalk where cracks were developing have been ground down in an attempt to eliminate trip and fall hazards for pedestrians.  There were also a number of cracks that were wide enough to allow a road bike’s tire to drop into and those have been filled and patched with concrete.  Numerous broken areas along the edges have been cut out and replaced.  That repair work, along with the new sections of sidewalk that were replaced on either side of both entrances into jetBlue, has made this a much safer route now for cyclists and pedestrians to access jetBlue Park.

These are “band aid fixes” for the short term of course; and I’m not sure how long some of them are going to last.  But a “tip of the hat” is in order for the LeeDOT team to address this with the limited resources that they have, and in time for the Grand Opening Event. 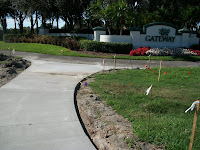 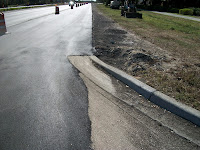 Daniels Blvd Westbound lanes were shifted to the left so that the paved shoulder will not be bisected by the curbs like it used to.  The right edge of the “shoulder lane” will now be where the new pavement line ends down the center of the picture.  It used to run where the dark, rough and torn up pavement is to the right of that center line. 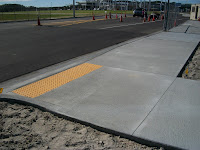 A new sidewalk on the right hand side of the East Entrance has been added!  Now when cyclists come in on the sidewalk from the East or right of the picture, they will simply turn on the sidewalk and continue in the gate to the Bike Corral straight ahead.  As long as the fence that is across the sidewalk now is removed for the event, then cyclists won’t have to get into the road for access. 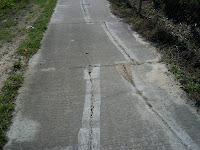 Hundreds of feet of cracks that were trip and fall hazards for pedestrians have been addressed by grinding them down a bit.  Not very pretty, but quite a bit safer.
Some of the widest cracks that would have put a road cyclist down have been filled in like this one. 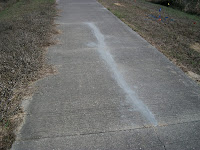 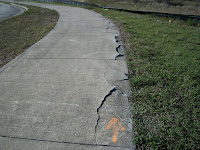 There is still work to be done.  This is the curve prior to the new intersection at Chana Ct. and Chamberlin.  This section back to Rickenbacker Pkwy has not been as thoroughly addressed as the section that runs directly in front of the stadium.  There has been some work, but not as much.
Wow!  The intersection with Chana Ct is being addressed!  The road will not be done much farther than the median to the right, but that will allow the path users to cross on pavement hopefully in the next two weeks prior to the Grand Opening. 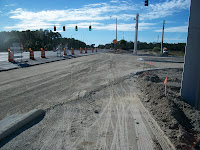