Thanks to BWL'ers Steve Chupack and Dan Moser for making Saturday's bike safety rodeo in Cape Coral a big success! 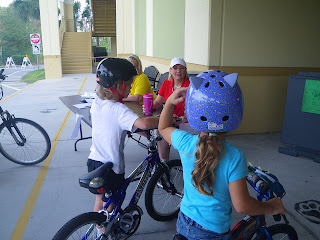 Dan Moser, certified bicycle safety instructor, provided training two days before the Rodeo for parent and other volunteers.  He is affiliated with Lee County Emergency Medical Services for clinics such as this and oversaw all the activities related to teaching the kids and parents the basics of safe bicycling.

Many of the volunteers wore the “Three Feet, Please” shirts donated by Bert Hamilton of Harvey Software.

Hollywood Bicycle Center co-owner Rob Ossichak provided the free bike safety inspection, making sure each bike was safe to ride.  Loaner bikes were provided to any child who needed one, from the Lee County EMS trailer used by Dan Moser.

“Bicycle Officer” Kelvin Thompkins represented the Cape Coral Police Department and was a big hit with the kids who saw that wearing a helmet is "cool."
Five child-size donated bicycles were awarded to the winners in a free raffle.  Fifty and $25 gift cards were also awarded.
BWL’s representative in Cape Coral, Steve Chupack, suggested the Rodeo event to the schools last October and helped the schools plan for the Rodeo.

Enthusiastic support for the Rodeo was provided by the Charter Schools Administrator, Dr. Lee Bush, and the principals:  Jacquelin Collins at McAuliffe Elementary and Steven Hook at Oasis Elementary.

“This bicycle safety event could not have happened,” Chupack said,  “without this strong administrative support and amazing work done by each school’s physical education teacher: Wendy Hearyman at McAuliffe and Kevin Brown at Oasis.”  Kids loved getting their  “bicycle license,” with their picture on it.  The idea was suggested by Wendy & Kevin.

Each child was accompanied by a parent and sometimes by both parents and siblings, making it a family oriented activity encouraged by the schools. An estimated two hundred people were at the event.
The Rodeo is a serious educational undertaking but its success is also due to the large element of fun that is built into the event.  Kids love to bike!  The Rodeo links the safety and fun parts in a unique and effective way.
Stations at the Rodeo included: helmet-fitting, Rules of the Road, navigating through cones, hand signaling, starting & stopping, avoiding road hazards.  The highlight of the Rodeo for many was the “the Snail Race” competition. ("How Slow Can You Go!)

This event is believed to be the first school-sponsored and school-based Rodeo involving two elementary schools in Cape Coral.

One goal of the Rodeo was to demonstrate that it could be a very effective “hands-on,” outside-the-classroom activity that supplements in-class instruction in a school’s health/safety curriculum.   BWL hopes  this Rodeo can serve as an example of what could be done at all  elementary schools.

This was a collaborative effort and there were seventeen contributors or donors whose generosity was so critical to the success of this Rodeo.