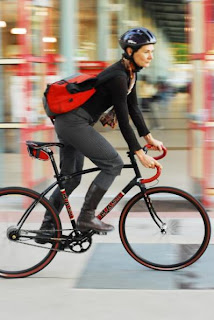 This week saw another letter to the editor about cyclists. Below the letter is Dan Moser's response that gets the facts straight.

News-Press Letters to Editor; 9/6/10
Cycle tags needed
It costs extra to have a bike lane on a road - more land, more asphalt, more paint, more signs.
If bicyclists are allowed to share the road, they should share the cost of the roads. They should be required to have bike tags and to pay annual registration fees for the tags. They should pass a test, then pay for a license and subsequent renewals in order to have road privileges.
Car, truck, and motorcycle drivers are required to have tags and a license; why not bicyclists who ride on the roadways?
Maybe if the bicyclists had to have a license and tags, they would think twice before riding side by side or three abreast in the road way. They might finally get a ticket.

It was great to see the following four letters to the editor responding to this letter published in September 10, 2010 News-Press

In response to a recent Mailbag letter suggesting
bicyclists need to pay our way ("Cycle tags needed,"
Patricia Kicklighter, Sept. 6,) I'd like to set the record
straight: Bicyclists do, in fact, pay their share of the
cost of roads they use - and don't use.

According to the Federal Highway Administration,
92 percent of the funds for local roads come from
property, income and sales taxes.

Bicyclists pay one or more of these taxes, as do
other nonmotorists. FHWA also calculates that
typically 94.4 percent of federal highway funds
come from user fees, meaning that 5.6 percent of
highway dollars are from non-transportation funds.
That means even bicyclists who do not own cars
contribute to federal highway funds, including for
highways that we are not allowed to ride upon.

Additionally, I, like many who bicycle, also own an
automobile, so am paying user fees regularly. Being
one who travels our public roads as a pedestrian,
cyclist, occasional transit user and motorist, I'm well
aware of the need for our transportation system to
accommodate a variety of modes. Rather than
discourage those having the least negative impact
on our environment, the roads themselves, and
overall quality of life, Ms. Kicklighter should
welcome us.

The logic behind Ms. Patricia Kicklighter's
cantankerous diatribe against providing bicycle
lanes on busy streets because of the cost becomes
hilarious if extended to the far more costly
sidewalks provided for pedestrians.

Ms. Kicklighter suggests that bicyclists should be
required to obtain a bicycle driver's license, take a test, pay an annual fee, and periodically be required to get renewals for the privilege of using the bicycle
lane.

Presumably, under her governance pedestrians
should also be required to obtain a pedestrian
walking license, take a test, pay an annual fee with
periodic renewals for the privilege of walking on the
sidewalks.

It has been my observation that more pedestrians
than bicyclists use the bicycle lanes in the absence
of sidewalks.

Finally, does Ms. Kicklighter really want to have a
child arrested if he or she is caught riding a tiny
bicycle side by side with a parent in the bicycle
lane?

Re: "Cycle tags needed," Patricia Kicklighter, Sept. 6.
How sad. When the rest of the world is trying to
discourage the consumption of polluting
hydrocarbon vehicles, here is an individual who
would tax bicycle usage.

Bicycling reduces the costs of traffic congestion,
parking and atmospheric pollution to name a few.
Its benefits also include better physical conditioning.

Bicyclists are aware of the safety and security of
riding properly and do not ride abreast on roads
because it is unsafe. They ride safely because they
are concerned and conscientious about inattentive
or malicious drivers who do not give them the
courteous and required 3-foot roadway clearing
space between car and bike.

A requirement for bicycle testing, as Ms. Kicklighter
suggests, would not eliminate unsafe bicycle riding
any more than vehicular testing would eliminate
drunk driving. Isn't this just one more suggestion
for bigger government?

I would hope that we could all live to respect and
accept our neighbors' differing interests even if they
do not coincide with our own. A little tolerance and
respect of other people's rights and interests goes a
long way toward safer roads for all concerned.

What an incredible situation is taking place in just
about every place on our planet but probably more
so in the United States.

The number of cars has increased steadily since
1960 and in fact cars have been outnumbering
licensed drivers since 1972 at an ever increasing
rate. Wow! Now what will happen in the next 100
years?

Obviously there's going to be a significant increase
in the total population in America and of course
here in Fort Myers. In the next 100 years we will
also have an incredible car problem. There just
won't be room for so many cars.

So what can Fort Myers do to help solve this
situation? Obviously we could use something else
for transportation. Maybe we can bring trains and
buses that could take us on local and long travels
so we don't have to take our cars all the time. Let us
think about new ways to move around.


Make your voices heard in support of biking, walking and using transit. Send a letter to the News-Press mailbag:
mailbag@news-press.com.
Posted by Darla at 9/07/2010 06:14:00 AM