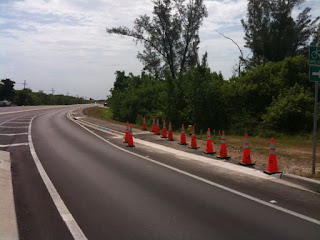 One of the items on the agenda for the 9/28/10 BoCC meeting today was approval of LeeDOT's annual $1.2 million roadway resurfacing contract. This contract will resurface the following roads: Buckingham Road, Estero Blvd., Island Park Rd., Littleton Rd., Neal Rd., Orange River Blvd., Palomino Lane, Staley Rd. and Whiskey Creek Drive. LeeDOT's resurfacing plan does not include adding shoulders to any of these roads to accommodate cyclists, as anticipated by the Complete Streets Resolution adopted unanimously by the Board in November 2009.

Dan Moser spoke on behalf of BikeWalkLee during the public comment period and urged members to reject this contract until it was amended to address the needs of other road users. According to Dan's comments, this list includes a number of roads where there is absolutely nothing for non-motorists and others that have a minimal shoulder that need to be widened and made usable by cyclists. One road in particular, Palomino Ln, has been on BPAC’s list for shoulders for a couple of decades. Some of the other roads are part of popular cycling routes that might be considered decent when riding on weekend mornings but otherwise aren’t places most cyclists would prefer to use.

Dan stated that it’s vital to take care of these problem roads whenever we have the opportunity. Additionally, by doing it now as part of the resurfacing, it’ll save a significant amount of money in comparison to adding them later as a stand-alone projects.

During the BoCC discussion, Commissioners Bigelow and Judah argued that these resurfacing jobs should have considered cycling shoulders for inclusion. Commissioner Judah requested LeeDOT to return to the commission in 2 weeks with an analysis of what it would cost to provide shoulders on each of these roads. The Board voted (3-1) to approve the proposed resurfacing contract with the understanding that they would consider change orders to the contract to provide for shoulders after the LeeDOT report is presented at the October 12th BoCC meeting. 10/6/10 UPDATE: The item is NOT on the BoCC agenda for October 12th. I'll keep you posted re: the new date.

Action Alert!
Before the October 12th meeting, let the commissioners know that bicycling and pedestrian facilities on these roads are needed. You can also attend the October 12th meeting (9:30 a.m. in BoCC Chambers) and speak in support of these facilities during the public comment period. If the commission doesn't direct staff to amend this contract to include these facilities, we’ll once again be missing opportunities to include space for cyclists and even pedestrians as part of these resurfacing projects.

Supporters also need to urge LeeDOT to use signs and pavement markings as an inexpensive and effective method of improving conditions – including safety – for cyclists and pedestrians on our roadways. The new Gladiolus Drive is a great model that needs to be replicated in other parts of the county.