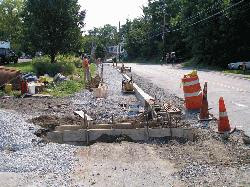 Buckingham Shoulders Phase II contract approved by BoCC on 9/21/10
The last update we had on this project was in May. Finally, the $391 K contract was awarded to Ajax Paving Industries of FL on 9/21. This section will provide paved shoulders from Neal Road to Gunnery Road. The work should begin by the end of October and be completed in 6 months.

Six Mile Cypress from Daniels to Heritage Lakes – construction to begin 10/4/10; it includes paved shoulders and asphalt paths (new 8’ on the west side, resurface existing 10’ on the east side) on both side of the road.


Daniels from Gateway to Chamberlain (by new Red Sox stadium) – preparing to bid; construction to begin late 2010/early 2011. 6’ paved shoulders on Daniels. Existing asphalt path on the north side of the road.


Energy Grant – Homestead Rd. sidewalk from Milwaukee to Veterans Park – Construction management contract is in process; to the BOCC in October/November; construction in early 2011.


The update for the ARRA sidewalk projects within the City of Cape Coral is as follows:

On a related note, the City of Cape Coral is in the process of putting together a second sidewalk crew to advance the construction of sidewalks on Trafalgar Boulevard from Santa Barbara Boulevard to Chiquita Boulevard. Funding in the amount of $300,000 will be provided through the TEA grant program. Construction is anticipated to start next month and the project is expected to be completed by summer 2011.

LeeDOT held a public meeting on Sept. 21st to discuss their plans for Burnt Store Rd. to be a “super street”. The bike/ped facilities planned for this road (which is not yet funded for construction)are paved shoulders/on-road bike lanes and a shared use path on the east side of the road. The bridges over the canals will be “humped” to allow pedestrian underpasses.

Since the tragic death of Ryan Santos at this intersection in April, we’ve been requesting a solution to this dangerous situation. See our letter to County Commissioners and the news story on the fatality: BWL speaks out on Cape bicyclist's death in letter to Lee County commissioners (May 24, 2010); and Bicycle death point to danger on Del Prado (4/29/10).

LeeDOT has now completed its traffic evaluation and the presentation of its findings and recommendations is now tentatively scheduled to the City of Cape Coral Transportation Advisory Committee on December 15th at 9 a.m.in the Cape Coral City Hall, 2nd floor, Room 220-A. [Note: this is a change from the earlier blog post.] It appears that LeeDOT will be recommending some changes in the median openings on Del Prado Blvd., but not the installation of any flashing safety signals or any changes to the crosswalks or signals. Interested Cape Coral residents should plan to attend this meeting and speak up.
Posted by Darla at 9/27/2010 03:31:00 PM