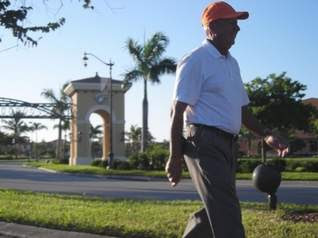 Six pairs of New Balance 993 sneakers have been worn out by one man in one year.
"I get about 400 miles out of them," said a smiling and tanned Phil Woods during a pit stop at the Coconut Point Starbucks this week.

Woods, 72, has spent every day since April 23 walking at least 25 miles and on Tuesday afternoon, he finally reached his Naples home.

But he still has many miles to go before he sleeps (or really rests.)

Woods is in the midst of a 2,200-mile journey that began at the Canadian border in International Falls, Minn. His walk will end Oct. 16 in Key West.

Four years ago, Woods completed a similar walk that took him from London Town, Md., to San Francisco.

"I'm doing it for a better America," said the smiling Woods. "It's to encourage people to take charge of their own health. We need more exercise. Health is a big problem in the United States. More than 50 percent of our youth aren't qualified to join the military because of obesity." To continue reading, click here.
Posted by Darla at 9/26/2010 10:18:00 AM