Benefits of Modern Roundabouts: Topic of discussion at MPO Board meeting

Thanks to Secretary Hattaway for being such an effective champion of roundabouts. BikeWalkLee strongly supports roundabouts as an effective way to improve bike/ped safety.

At the Jan. 16th MPO Board meeting, Billy Hattaway, FDOT District 1 Secretary, made a presentation about the benefits of modern roundabouts.  Based on questions raised about roundabouts at the December meeting, Secretary Hattaway was invited to make this presentation. 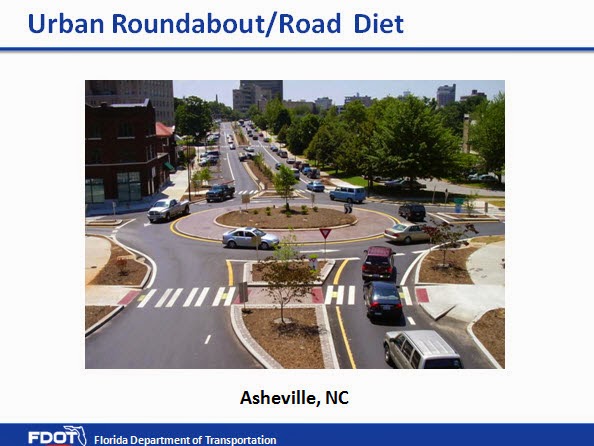 Background
FDOT has placed added emphasis on the development and construction of roundabouts statewide and directed each district office to include 2 projects on state highways in their 5 year work program annually for implementing roundabouts.  Since 2013, the Lee MPO has been working with FDOT on developing a roundabout feasibility study, which was approved this Fall, funded by FDOT in the amount of $400,000, and will soon go out to bid.  The Lee MPO identified a comprehensive list of 20 intersections to conduct roundabout feasibility analysis.

The case is well stated in the scope of work for the Lee Roundabout Study:
"With traffic moving inside a roundabout between 15-25 mph, and with significantly less number of conflict points than a conventional traffic signal, roundabouts have been found to increase safety by reducing potential fatal crashes at an intersection by 90%, injuries by 7%, and all crashes by 39%.  Research in the US and elsewhere in the world has also indicated that roundabouts provide annual savings of $5,000 in electrical and maintenance costs vs. a traffic signal, and that they provide a service life of 100 years or more vs. 10-20 years for a traffic signal.  Unlike signalized intersections they are also not impacted by power outages caused by hurricanes and tropical storms, a phenomenon that happens with some regularity in Florida.  They also reduce vehicle delays by around as much as 50% as traffic flows continuously through an intersection." 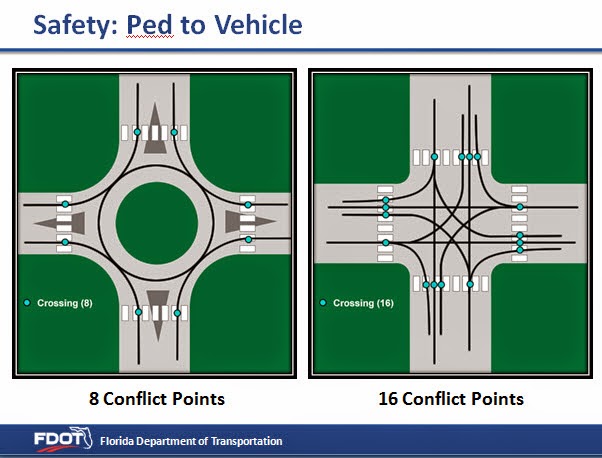 As part of Secretary Hattaway's PowerPoint presentation (click here), he emphasized safety as the most important reason for roundabouts.  He also clarified that modern roundabouts are NOT the same as traffic circles (aka "rotaries" in New England).  A big reason that modern roundabouts work better is that there are less conflict points--for motorists the number drops from 32 to 8; while for pedestrians the number drops in half.
Fewer conflict points means safety is improved.  He highlighted the benefits of roundabouts: 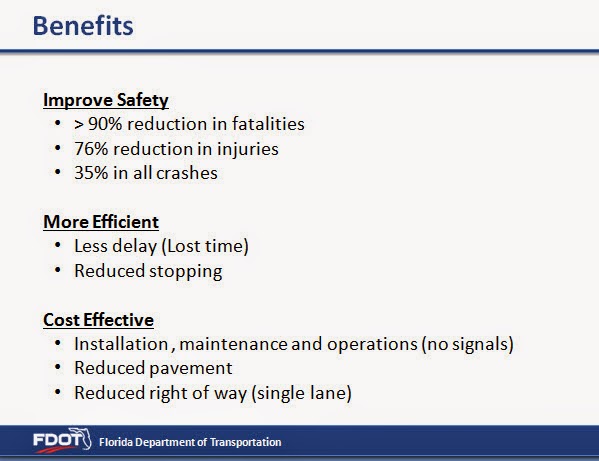 While roundabouts have been around in other countries for several decades, they didn't take off in the US until the mid-1990's, when the US began to have data from US cities with roundabouts, proving the safety benefits of this treatment.

Board Discussion
Board members expressed their appreciation to Billy for his excellent presentation and expressed their support for roundabouts.  Fort Myers Councilman Flanders pointed out that Lee County is behind other Florida communities in installing roundabouts and we need to catch up.  He emphasized the value of this approach for emergencies such as hurricanes when the power is off.  Councilman Burch said he was now a believer in roundabouts, and asked that there be before and after data analysis of the safety benefits when they are installed in Lee County.  Commissioner Hamman commented that roundabouts are aesthetically pleasing, and asked about public outreach when a roundabout is going to be installed.  Hattaway responded that public outreach is key and that FDOT is doing more of this.  Studies show that before a roundabout is installed, 75% of the public oppose the roundabout, and then after it's installed, that number flips, with 75% supporting the roundabout.  Commissioner Mann talked about his experience in Lehigh over the past 3 years where two roundabouts have been installed, and confirmed Hattaway's comments about how public concern disappears as soon as it's installed and they become familiar with how it works.

The Board also discussed concerns about how the disabled were able to navigate roundabouts.  In response to a question from Cape Councilman Carioscia, Secretary Hattaway stated that there is less exposure because the distances between the sidewalks and the refuge islands are smaller and there are ADA ramps.  During public comment, Mike Ulrich of the Florida Council of the Blind spoke about the difficulties of navigating a roundabout if you're blind.  He asked that the concerns of the blind be taken into consideration during the feasibility study, and invited anyone to join him in a blind-folded walk through a roundabout.