On May 20th, BikeWalkLee issued a press release on the national 2014 Dangerous by Design report.

Fort Myers, FL --Florida continues to be the most dangerous state in the nation for pedestrians, and Lee County's numbers are among the worst for Southwest Florida, according to a new report released by the National Complete Streets Coalition. From 2003-2012, 5,189 people were killed while walking in Florida, with 163 of those in Lee County.

The report, “Dangerous By Design 2014,” ranks America's major metropolitan areas according to a Pedestrian Danger Index (PDI) that assesses how safe pedestrians are while walking. The top four deadliest major metropolitan areas in the country for pedestrians are in Florida – Orlando, Tampa, Jacksonville and Miami. The report also found that the majority of those deaths likely could have been prevented with safer street design. 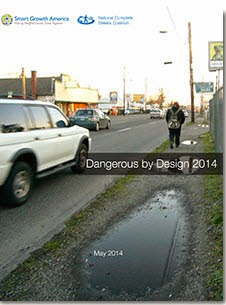 The report looks at the annual pedestrian death rate (per 100,000 people) for the past five years (2008-12) in the 20 metro areas in Florida, including the Cape Coral-Fort Myers area, and shows that our area ranked in the bottom 20% of Florida metro areas for pedestrian death rate (ranked 18th out of 20). This is a major improvement over the 2011 report, when our metro area ranked 5th out of 20 when ranked by fatality rate. A key difference is that the data set eliminates the period of 2005-2007, which saw record high pedestrian fatalities in Lee County.

While Lee County's relative rankings within the state have improved, it's important to remember that our pedestrian fatality rates and percent of all traffic deaths that are pedestrians far exceed the national averages.

Compared to the 2011 “Dangerous by Design” (which used 2000-2009 data), Lee County's performance made moderate improvements relative to both national and Florida numbers (see attached table). This is tempered by the knowledge that the county’s performance worsened in 2013, when Lee County had a record 24 pedestrian fatalities--the highest since 2005 (which saw a record 32 fatalities).

The majority of pedestrian deaths occur on roadways that are dangerous by design -- engineered for speeding traffic with little to no provision for the safety of people walking, biking or using public transit. As the report points out, Florida grew in the post-war period, mostly through rapid spread of low-density neighborhoods that rely on wider streets with higher speeds to connect homes, shops and schools -- roads that tend to be more dangerous for people walking. Seventy-three percent of pedestrian deaths in Florida were on roads where the posted speed limit was 40 mph or greater (compared to 61.3% nationally). In Lee County, the percent was even greater -- 81.8%.
Pedestrian safety is often perceived as a strictly local issue but, for decades federal dollars have been invested in thousands of miles of state and local roads in the heart of communities. In fact, 68 percent of all pedestrian fatalities over the past decade occurred on federal-aid roads--roads that follow federal guidelines and are eligible to receive federal funds.

"Older adults have the greatest fatality rate of any group," said AARP Florida State Director Jeff Johnson. "Although Florida has made strides to address pedestrian fatalities in the last few years, there is clearly much more work to be done to make Florida streets and highways safer for all pedestrians,” Johnson said. “AARP stands ready to work with Florida state, county, city and advocacy groups to make our streets safer for all.”

The “Dangerous by Design” report includes recommendations for federal, state, and local officials to help communities save lives and improve the safety and comfort for everyone who uses the roadways. Since the last report in 2011, Lee County has undertaken some of these recommendations. First, the county's adoption of a complete streets policy and implementation plan in 2009 serves as the critical long term framework for making our streets safer for all users. In 2011, the Lee County MPO adopted its first ever countywide bicycle and pedestrian master plan, followed by a countywide bicycle and pedestrian safety action plan in 2013. This action plan includes many improvements highlighted in the national report. The plan also takes a collaborative approach, bringing together transportation, public health, law enforcement agencies and advocates to work on these problems.

"The key now is for each local jurisdiction and agency leaders to implement the approved action plan," said Darla Letourneau with BikeWalkLee, a local coalition working to encourage complete streets in Lee County. "It will take commitment and sustained leadership to implement this plan, but it is vital to the safety and quality of life of our citizens that our unacceptably high pedestrian and bicycle fatalities and injuries be greatly reduced," Letourneau said.
Florida and Lee County have a long way to go to improve the safety for all road users, but we're on the right path. We look forward to the day when Florida no longer holds the dubious distinction as the most dangerous state in the nation for both pedestrians and bicyclists.

·         To view the full report, click here.
·         Click here to review the Florida report, which contains data at metro and county level.
Click here for  Link to interactive map of fatalities.

Click here for BikeWalkLee's complete package of tables, graphs, and analysis related to the 2014 report.

New: Click here for the NBC-2 News story on 5/20 on the report, with an interview with BWL's Dan Moser.

BOX:
Over the past decade, Lee County has received millions in funding from the federal Transportation Alternatives program (and its predecessor programs), which have supported sidewalk and bike path projects throughout the county that have made it safer for pedestrians, as well as cyclists. In September 2013, the Lee MPO was successful in winning a $10.4 million federal TIGER grant for its complete streets initiative project, which will close gaps in the county's pedestrian and bicycle infrastructure and improve safety of our roadways. Closely tied to the TIGER grant is the Lee MPO's Bicycle Pedestrian Safety Action Plan (BPSAP) adopted in September 2013, aimed at greatly reducing pedestrian and bicycle fatality and injury crashes through a wide range of recommended activities – from education, engineering to enforcement. (See Bicycle Pedestrian Safety Action Plan, p. 8-11 has the 18 specific action items.)

About Smart Growth America:
Smart Growth America is the only national organization dedicated to researching, advocating for and leading coalitions to bring better development to more communities nationwide. From providing more sidewalks to ensuring more homes are built near public transportation or that productive farms remain a part of our communities, smart growth helps make sure people across the nation can live in great neighborhoods.

About BikeWalkLee:
BikeWalkLee is a community coalition raising public awareness and advocating for complete streets in Lee County—streets that are designed, built, operated and maintained for safe and convenient travel for all users: pedestrians, bicyclists, motorists, and transit riders of all ages and abilities. For more information, visit www.BikeWalkLee.org, the BikeWalkLee blog at http://bikewalklee.blogspot.com/, or find us on Facebook and Twitter.

SIDEBAR:
State steps up for safety

As the national report highlights, while the federal government can set the tone for national approach to safety, states have ultimate responsibility for reducing pedestrian and bicycle fatalities and injuries. The year 2011 was a turning point for Florida, when the Florida Dept. of Transportation (FDOT) decided the state had to take action to shed its ranking as worst in the nation. In 2011, FDOT Secretary Ananth Prasad launched a statewide pedestrian and bicycle-focused initiative, led by FDOT District 1 Secretary Billy Hattaway. This comprehensive initiative is focused on Florida's top 10 worst regions, which includes Lee County. For the past two years FDOT has provided additional assistance and resources to help Lee County in improving pedestrian and bicycle safety.

"Since 2011, there has been a sea change at the state level, with FDOT taking many steps to improve policies, procedures, staffing, and its agency's culture, and Lee County is benefitting from FDOT's leadership,” said Darla Letourneau with BikeWalkLee. “We are confident that FDOT's initiative will make Florida a safer place to walk and bike; however, the results in terms of reduced fatalities won't show up immediately. Roads that are dangerous by design take years to be modified and improved for pedestrian and bicycle safety, so the task is like turning a battleship, not a rowboat," said Letourneau.

"We are especially looking forward to the soon to be released FDOT complete streets policy and implementation plan and guidance on road diets, context-sensitive-based pedestrian and bicycle design, mid-block pedestrian crossings, and promotion of roundabouts. All of these policies and guidelines will be valuable tools for local agencies working to improve the safety on our streets," said Letourneau. "We hope that in the future FDOT will also pursue additional policy changes recommended in report, such as reforms in evaluating roadway performance to account for the needs of all travelers, reforms in policy for establishing speed limits to provide local control, and allowing a wider range of guidelines."