Dan Moser Column:Will the public finally get the message?

Dan's column this week highlights the findings of the national Dangerous by Design report and the progress that is been made in Lee County over the past several years to improve bike/ped safety.
Florida Weekly, Outdoors Section, May 28, 2014

Last week it felt a lot like “Groundhog Day,” the Bill Murray movie where every day is repeated with the outcome already known when the latest Dangerous by Design report (formally known as Mean Streets) was released. As it has been in past reports, our state ranks as the most dangerous for pedestrians and our local area is among the worse metro areas in the U.S.

As was the case last time, the four most pedestrian-unfriendly metro areas with populations more than one million, Florida’s Big 4: Orlando-Kissimmee, Tampa-St. Petersburg-Clearwater, Jacksonville, and Miami-Fort Lauderdale Pompano are the country’s most dangerous, according to the report.

The good news is that the Fort Myers- Cape Coral metro area actually improved slightly from the 2011 report. The bad news is that the time period being considered is 2008-2012 so it doesn’t include 2013, a year in which 24 pedestrians were killed on Lee County roads, one of the highest number and largest percentages of all traffic deaths ever recorded here. But even considering this disturbing statistic — and that fact that many more people sustain life-changing injuries — significant progress has been made in efforts to reverse this persistent public health problem. At least from a design standpoint, which is the primary focus of Dangerous by Design. 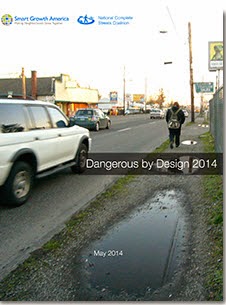 Here are a few examples of the progress made over the past few years, many which I have covered in this column:
Since only a few of the projects that reflect this new approach are actually on the ground, any corresponding improvements to our bike/ped crash, injury and fatality rates have yet to be realized. But there’s reason to be optimistic, assuming we, as drivers, cyclists and pedestrians, take advantage of the positive changes. Human behavior, after all, is the one unknown that’s crucial to making things work. Hopefully, as roadway design moves away from focusing on moving as many motor vehicles as quickly as possible and toward a Complete Street model, which gives all users a fair shake, driver behavior will also change for the better.

One more factor that is out of the control of transportation infrastructure planners and engineers but is within the realm of auto manufacturers is their eagerness to build-in driver distraction (for profit, of course). Again, the use of distracting devices is as much about human behavior as anything else, but as is the case with roadways built to induce high-speed driving, auto manufacturers need to take responsibility for reducing or eliminating in-vehicle distractions. And as was the case for many decades with roadway engineers, the argument that they’re only building what people are asking for only goes so far, especially when so many lives are affected by their deliberate decision to create an environment that significantly adds to the problem. Unfortunately, it may take many more lost lives and class action lawsuits to get to that point.

To leave this on a positive note, as Bill Murray’s “Groundhog Day” portrays, there’s a chance for a better outcome from something that appears stuck in the same old pattern. You can read more about Dangerous by Design at BikeWalkLee’s blog.

— Dan Moser is CyclingSavvy instructor/ trainer and program director for the Florida Bicycle Association. He can be contacted at dan@floridabicycle.org or 334- 6417.

Cycling and other events: