News-Press: Biking to work is a growing trend

Nice article by News-Press about biking to work in Lee County, with interviews with LeeDOT's Andy Getch (who bikes to work), BWL's Dan Moser, and others.  Take the poll:  Poll: Would you consider riding a bike to work? AND give biking to work a try! 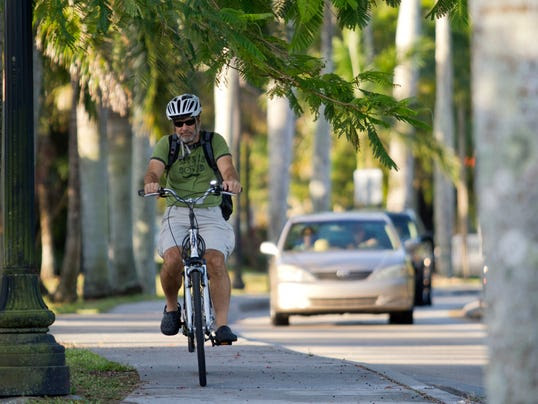 The emerald-green Kulana "Moondog" would look at home on Fort Myers Beach or on Sanibel's famed bike path.

But this nonmotorized, two-wheel beach cruiser frequents the streets of central and south Fort Myers, getting Jada Hill, 25, to her server's job at Famous Dave's barbecue.

A tight budget made her a bike commuter about three years ago, Hill said. When possible, she and Moondog ride part of the way on a LeeTran bus, so she pedals only about two miles one way. When it's not, the trip stretches to five miles or more.

"You get used to it," Hill said. She's proud to be able to get around on her own.

"It's my vehicle. Even when I could get a car ride, I don't wait on anybody. I grab my bike and go," Hill said, pausing at a LeeTran bus transfer station to talk with a reporter.

That's a bigger percentage increase than for any other commuting mode, according to the report.
And, although the number of bicycle commuters in Lee and Collier counties didn't grow by quite as much, the percentages of increase outpaced the growth rates in number of workers from 2000 to 2012.

Data analysis by the Center for Urban Transportation Research at the University of South Florida in Tampa shows: 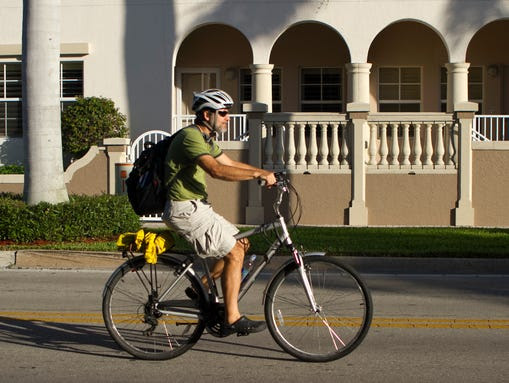 Andy Getsch rides his bike on West First Street on his way to work in downtown Fort Myers on Thursday morning.(Photo: Amanda Inscore/news-press.com)

"In recent years, many communities have taken steps to support more transportation options, such as bicycling and walking," said Brian McKenzie, a Census Bureau sociologist and the national report's author. "For example, many cities have invested in bike share programs, bike lanes and more pedestrian-friendly streets."

Bicyclists still account for just 0.6 percent of all commuters; however, some of the nation's largest cities have more than doubled their rates since 2000. Portland, Ore.'s bicycle-commuting rate is 6.1 percent, up from 1.8 percent in 2000. In Minneapolis, the rate increased from 1.9 percent to 4.1 percent.

In Lee County, bicyclists comprised eight-tenths of a percent of all commuters in a 2008-2012 rolling average. Collier County, with an almost nine-tenths of a percent share, made it into Florida's top 10.
Numbers 1 and 2: Monroe County (think Key West); and Alachua County, home to the University of Florida.

"The Southwest Florida numbers are quite low. There's a lot of room for improvement," said Dan Moser, a bicycle/pedestrian/traffic safety consultant and a leader in the BikeWalkLee advocacy group.

Poll: Would you consider riding a bike to work? Growing trend
Still, Moser and others think the bike-to-work trend will grow.

At Just Riding Along near North Fort Myers end of the Edison Bridge, "We see quite a few people who ride (to work) out of choice," said store co-owner Arley Michel.

Michel estimated 20 percent of the people who buy bicycles from the shop intend to use them at least part of the time, for commuting to work or to school.

People opt for a bicycle commute for many reasons, including a desire to get more exercise, enjoy the outdoors, reduce environmentally harmful carbon emissions and cut transportation costs.

The most recent AAA study shows an average cost of more than $8,800 a year to own and operate a sedan, based on 15,000 miles of annual driving.

When Cape Coral resident Beatrice Galvin's daughter needed a car to commute to her job in Orlando, Galvin didn't hesitate to give up her car — and the monthly payments — to her daughter.

Galvin, who's in her 50s, rides about a mile from her home to Cape Coral City Hall, where she works in the finance department.

She pedals to work shortly after sunrise. Later, her husband, who works a midnight shift at B.J.'s Wholesale Club, drops off the couple's remaining car at City Hall, and pedals the bike home. Galvin gets the car back to their home in plenty of time for his nighttime work commute.

"I look at nature. I appreciate having the health to ride a bike to work," Galvin said.
Health is the main reason Andy Getch, 54, committed to riding his bicycle to work full time seven years ago.

"I wanted to build some regularly scheduled exercise into my daily routine," said Getch, an engineer and planning manager with Lee County Department of Transportation.

The route Getch favors winds its way through central Fort Myers about four miles, to his office in downtown. There's is one car at home. It comes in handy when Getch's wife picks him up during severe thunderstorms.

More people would commute to work if local roads were safer and easier for cyclists to use, said Moser, who bicycles almost everywhere.

Although bike lanes, signs and other street adaptations are increasing in Southwest Florida, "there is still a lot of disconnect," according to Moser.

More-experienced, confident cyclists will take to the road, which gets plenty congested with motor vehicle traffic during morning and evening rush-hours.

"I don't think any single bridge here is designed for cyclists or pedestrians," Moser said.

There have been improvements, though. Moser hailed the partnership between the city of Cape Coral and the nonprofit, all-volunteer Cape Coral Bike Ped group to help cyclists find the best routes around the city.

Said Moser: "By year-end, they'll have 90 miles of marked bike lanes, pathways and other bicyclist- and pedestrian-friendly routes."

And, although the number of bicycle commuters looks small; it doesn't tell the whole story, said Julie Bond, senior researcher at the Center for Urban Transportation Research.

Bond noted "the census asks people how they usually get to work, so part-time bicycle commuters may not be included."