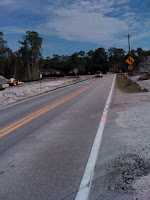 According to FDOT (Mark Clark) and LeeDOT (Sarah Clarke), $453,000 of federal ARRA (stimulus) funds has been programmed to continue the Buckingham shoulders from Neal Rd. to Gunnery Rd. Over the past several months, the two agencies have been back and forth on finalizing plans for the project. FDOT is expected to approve the final plans next week and then LeeDOT can advertise the job in June. Bids will open in July and construction should begin in September/October.

According to LeeDOT, this segment of Buckingham Rd. is not as badly rutted as the first segment (fewer heavy trucks travel this segment) so hopefully, we won’t have the same problem with holding a constant shoulder slope. I think the shoulders and repaving of phase I of the Buckingham Rd. project should be near completion. If you're riding out that way, take a photo and send it to me & I'll post it (dletourneau@bikewalklee.org).
Posted by Darla at 5/21/2010 02:55:00 PM