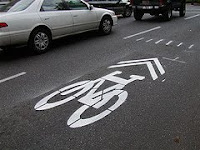 1:10 A.M. — Bicyclists have as much claim to
roadways as those who travel by car.

But too often, when cyclists like Dan Moser of Fort
Myers bike down stretches of McGregor Boulevard
or U.S. 41, they're forced to the curb, clipped by
passing vehicles or shouted at by drivers who don't
know or care that they have to share the pavement.

In a few weeks, Lee County's Department of
Transportation will introduce a new sign, called a
"shared lane marking" or "sharrow," approved in
December by the national Manual on Uniform Traffic

Control Devices. Its aim: to alert drivers that they
aren't the streets' sole navigators, and mark a safe
path for on-road cyclists.

Other cities over the past year - including
Gainesville, Denver and Portland, Ore. - have posted
the signs, with positive feedback.

"It's a fairly new concept," Moser said. "For anyone
who cycles here in Lee County, it's a huge leap in
the right direction."
Click here to continue reading the article.


The Naples Daily News (as well as the Island Sun) published the press release issued by LeeDOT last week.
Click here to read the full article.