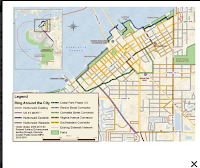 He proposed that within five years the city will be the friendliest for Florida for bicyclists, joggers, rollerbladers or anyone who decides to get around town without a car.

The cornerstone of the city’s commitment is a 17-mile interconnected trail, dubbed the Ring Around the City. With bells and whistles, including landscaping and structures along the trail, wide-range estimates put the cost at between $12 and $19.6 million.

Citizens agreed to help fund the Ring through an additional 1 percent sales tax, from 2009 to 2014, the time the Ring should be finished. About five miles’ worth of trail have been built thus far. To get the wheels rolling last year, city council agreed to borrow $4.5 million based on the revenue they estimate will be generated by the tax. To read the full story, click here.