News-Press continues their "Share the Road Florida" campaign with another excellent article looking back on SWFL bike/ped safety in 2015 and finds indications of improvement.  The article includes interviews with BWL, NPC, FHP, and SAJD.  As Jay Anderson of SAJD says, "Change comes with awareness over time."  Let's keep the awareness front and center in 2016 as we continue our marathon to safer streets for all users.
News-Press Jan. 5, 2015 by Janine Zeitlin
http://www.news-press.com/story/news/2016/01/04/lee-collier-getting-safer-cyclists-cycling-florida/78052160/

For the first time in years, numbers reflect some curtailing of the bike crash crisis.

Remember the woman who reportedly spat on a Naples bicyclist after driving into him?
Or the man who plowed into bicyclists on Fort Myers Beach? In the bloody aftermath, reports said he told a doctor, “I should have hit them harder.”
Then, there was the guy who shot at a cyclist in Cape Coral who asked him to slow down.
That all happened in 2014, a year of horror stories for bicyclists in Southwest Florida.
It was the same year Lee County hit a 14-year high for bike injuries and ranked third in the state for bicyclist fatalities. Florida is the most lethal state in the nation for bicyclists. 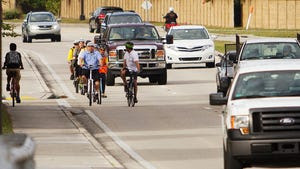 The sorry state of safety galvanized advocates, some local cities and politicians, law enforcement and the media toward solutions. The News-Press began its Share the Road campaign in 2014.

Then came 2015, and while it’s too soon to declare a road culture shift, the climate is looking less grim for bicyclists.

“We’ve broken through in terms of the community conversation about it,” said Darla Letourneau of the coalition BikeWalkLee.

“There are still very many people who believe that bicyclists don’t belong on the roads but, compared to a year ago, there are more people that understand that bicyclists have a right to be there and are going to be there,” said Ted Zelman, a Naples attorney who represents bike crash victims and is on the board of Naples Velo bike club.

He rides about four times a week.

“You get honked at less and fewer cars are buzzing you.”

Beth Brainard, executive director of the Naples Pathways Coalition, notices that more, even most, drivers now give bicyclists the three feet of space mandated by Florida law. That courtesy was not the norm two years ago, she said. 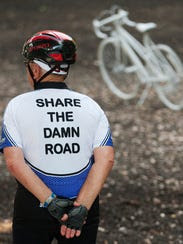 Zelman and Brainard pointed to a 2014 bike crash that seriously injured well-known Naples lawyer Chuck Kelly as one rallying point for change. The driver received a $170 fine for what was perceived as reckless driving.

Brainard also credited awareness-builders such as, NPC’s Share the Road rides, bike-friendly signage and infrastructure, media coverage and the legislative push from Rep. Kathleen Passidomo to better protect vulnerable road users. Passidomo’s law partner is Chuck Kelly. His wife, Tish, has been instrumental in lobbying for steeper penalties for drivers who injure riders, motorcyclists and walkers.

There’s also been a push for improvements in Lee County, which has ranked in the top 10 in the state for bike and pedestrian crashes. Cape Coral leaders and advocates pulled together to map out safer and scenic bike routes. A Cape Coral Bike-Ped volunteer says it's led to more people riding.
Florida Highway Patrol has been visiting high schools, doing quarterly outreach in hot-spots and installing bike lights to increase visibility. Fort Myers Police and the Lee County Sheriff’s Office received grants for bicyclist and pedestrian outreach. The progress has been notable in cities like Naples and Cape Coral, which recently received coveted bike-friendly awards from the League of American Bicyclists.

“If you keep it out in the forefront and you make people aware, hopefully when you’re driving down that road and you do see that bicyclist, instead of people saying, ‘Those idiots don’t belong on the road’ you give them more room.”

Letourneau was cautiously optimistic about the figures given assumptions that the population is growing, as are the number of people walking and biking.

(Pedestrian crashes in Lee and Collier did increase somewhat over the past year.) 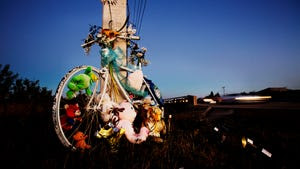 But road design is still a worry. Florida’s fast, wide roads are often blamed for making it so perilous to walk and bike. Intersections are particularly dangerous. Lt. Greg Bueno of Florida Highway Patrol said a common local crash happens when a driver turning right fails to watch for a walker or bicyclist coming the other way.

Letourneau praised the Florida Department of Transportation for its recently released complete streets implementation plan, which will change the way state roads are planned and designed and make those roads safer for all users. Lee County and its cities have adopted complete streets policies but have lagged in on-the-ground changes.

Research has shown it’s safer to walk and bike in places where more people bike and walk so a not-so-horrible year could bring more positive ones.  Yet, one year does not signal a trend.

“That’s our hope,” said Lt. Bueno, “but we also know from years past how quickly it can fluctuate the other way.”


THE NEWS-PRESS
Florida bike crashes: 7 things that may shock you