Kudos to the Southwest Florida Community Foundation team and thanks to everyone who came to Friday's "Meet and Greet " event where BikeWalkLee presented the award. 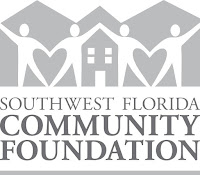 BikeWalkLee, a local community coalition advocating for complete streets in Lee County, has selected the Southwest Florida Community Foundation as the 2015 Complete Streets Champion of the Year for its leadership in broadening the community conversation about the role of complete streets in the larger goals of quality of life, economic vibrancy, and a sustainable future.

BikeWalkLee presented the award on Jan. 22nd at the Foundation's Fort Myers office during BikeWalkLee's "Meet and Greet" event, bringing local and state advocates together while the Florida Bicycle Association Board was in town.

BikeWalkLee has been giving this annual award since 2010 to recognize progress being made in support of completing the streets of Lee County. Over the past five years our awards have gone to elected officials, government agencies/staff and their advocate partners for adopting and implementing complete streets policies (Lee County, City of Bonita Springs) and specific initiatives or improvements to make our communities more bikeable and walkable (City of Sanibel and the Sanibel Bicycle Club; and Cape Coral and Cape Coral Bike-Ped).

"While the role of government is a key ingredient in the transportation paradigm shift that underlies the complete streets approach, it is only one of the ingredients. Broad-based community support and engagement is another key ingredient to the ultimate goal of making our community more livable," said BikeWalkLee's Darla Letourneau.

"During the past year, the Community Foundation has been a leader in broadening the community conversation about the role of complete streets in the larger goals of quality of life, economic vibrancy, and a sustainable future. SWFL is lucky to have such an innovative Community Foundation," said Letourneau.

Under CEO Sarah Owen's leadership these past four years, the role of the Foundation has grown into something much more than giving out money. The Foundation leads, it facilitates, it inspires, and it rallies the community around important causes. The Foundation engages the community in conversations and actions that create sustainable positive change and provides the funding to make those changes a reality. They play a pivotal role in bringing together community agencies, businesses, governments, funders, and stakeholders to help our community find solutions to our toughest challenges. They facilitate conversations about big issues in our community--from sustainability, to workforce development, to physical and environmental health, to pedestrian safety and walkable communities. 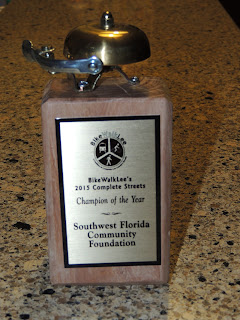 "To take the complete streets vision to the next level, the Foundation bringing a new voice to the conversation and broadens the dialogue in a way that no government entity or other stakeholder can do on its own. The Foundation is rallying the community around this important cause, demonstrating that complete streets are a tool for making our communities more complete, more livable, and more walkable. In short, it is making our community a place where people want to be, " said Letourneau

During the past year the Foundation has taken over the leadership and implementation of the community-wide Sustainability Plan, and recruited Tessa LeSage, the County's leader for the award-winning Plan, to the Foundation.

The County's Complete Streets policy and implementation were an integral part of Tessa's work with the county’s Community Sustainability Advisory Committee, so having this project move to the Foundation provides a broad framework for continuing a complete streets focus in the broader community.

CEO Sarah Owen has assembled an incredibly talented team at the Foundation--not just Tessa, but also other talented young people like Ashley Skalecki who previously worked on complete streets related issues. BikeWalkLee's Cindy Banyai is also part of the Foundation team helping to integrate the former county sustainability plan into the Foundation’s goals and work.

In addition, the Foundation helped advance the complete streets conversation last year in several other ways:
"The Foundation is in a unique position to lead, facilitate, inspire, and rally the community around the cause of complete streets and livable communities, and BikeWalkLee looks forward to collaborating with the SWFL Foundation as we tackle these important challenges facing our community," said Letourneau.