Today FHP held a press conference to launch an awareness campaign to address the increasing number of hit-and-run crashes in Florida.  Between 2012 and 2014, cases of hit-and-run collisions in Lee County increased by 50 percent, and we know that a disproportionate number of the victims are pedestrians and cyclists.  As a society, there should be zero tolerance for drivers who hit and run. 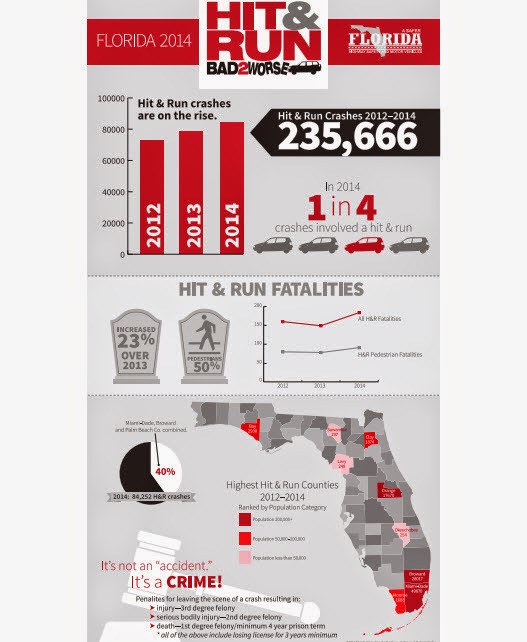 News-Press 2/16/15
by Michael Braun:  With hit and runs on the rise, agencies increase awareness

The pain clearly stays with the families of those killed in a hit and run crash.

"My life got pulled out from under me," said Lesley Colantonio, wife of Richard Colantonio, who was killed in a hit and run crash on I-75 in January. "I'm hoping that someone saw something."

"Its hard to go through holidays and birthdays," said Misty Snyder, whose brother Charles was killed in a hit and run crash in November. "I don't think it is something that anyone becomes complete OK with."

Snyder and Colantonio were part of a concerted educational effort Monday by the Florida Highway Patrol and several area law enforcement agencies to educate to public on their responsibility in a crash.

"If you decide to leave the scene of a crash you make the situation worse," said Lt. Dennis Petraca of the Lee County Sheriff's Office. He added that it is a first degree felony if there is a death involved and a third degree felony if injury is involved, in these types of crashes.

Lt. Greg Bueno of the FHP said a change in the law in October made the penalty more severe for hit and ruin crashes. "All motorists, pedestrians and bicyclists need to become educated in the law," he said.

The emphasis on hit and run crashes comes from their increasing numbers in the state.

Between 2012 and 2014, cases of hit-and-run collisions in Lee County increased by 50 percent. The increase in Collier County over the same period of time is 41 percent.

"Working together we can reduce the number of hit and runs,"Cardwell said.