BikeWalkLee Column: Let your bike take you out to a ballgame

It's time to give biking to the ballgame a try...and you can get there on the great Tour de Parks 35 mile biking route. 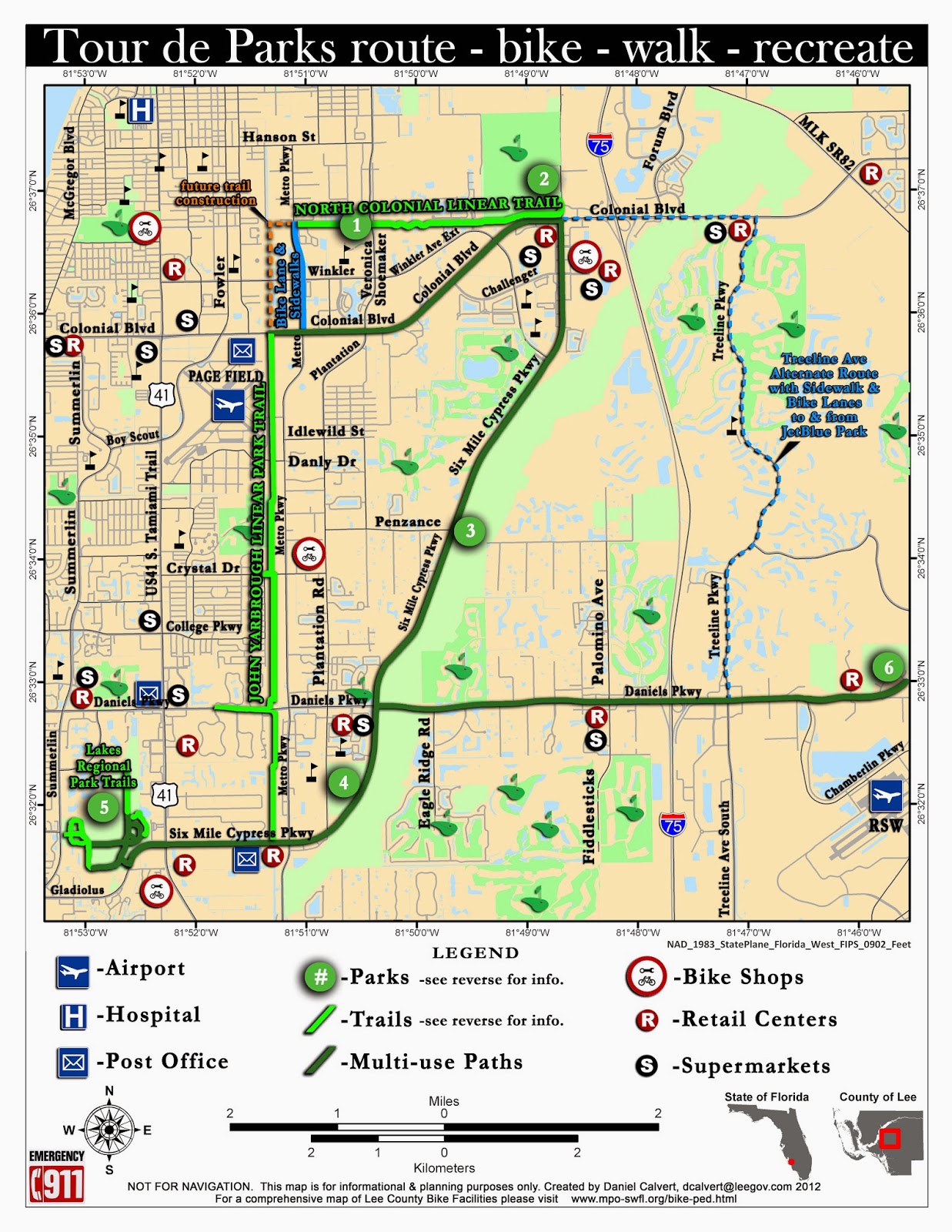 Spring training games are less than a month away and many fans are making plans to see their favorites players at JetBlue Park (Boston Red Sox) or Hammond Stadium at the Lee County Sports Complex (Minnesota Twins). With players reporting in a couple of weeks and play beginning in early March, there will be plenty of action for any fan.

There will also be plenty of traffic, as anyone who has braved the games will attest. That’s where the bike comes in — as a way to whisk you to the ballpark while keeping you (mostly) off the roadways.

Both spring training sites are easily accessible by bike, even for the most inexperienced riders. The Sports Complex, in particular, is served by bike paths from all directions. JetBlue has protected streets leading in from the north, while the most popular Daniels Parkway route is mostly served by bike paths with some bike lanes thrown in. Coming from the south on Treeline Avenue will mean using the roadway’s popular bike lanes — and, while you’ll share the road with motor vehicle traffic, you’ll have your own space that’s marked and (mostly) respected by drivers. 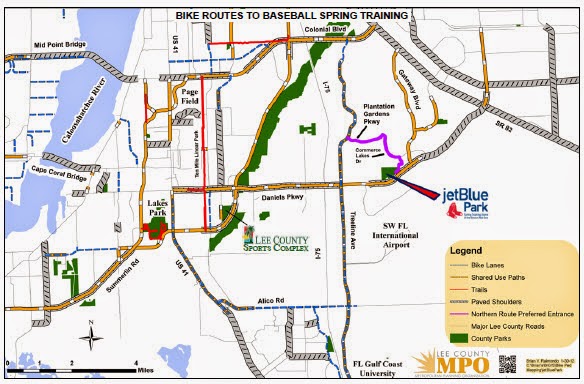 Many of these routes are part of the county’s Tour de Parks network, which ties together Lakes Park and the Calusa Nature Center, the Yarbrough Linear Park and the North Colonial Linear Trail, the full length of Six Mile Cypress Parkway from College Parkway to U.S. 41 — and the two stadiums, of course.

With its easy access from major residential and commercial areas, this network is convenient and well used — and offers enough variations to allow to you ride it again and again. Be sure to give it a try. 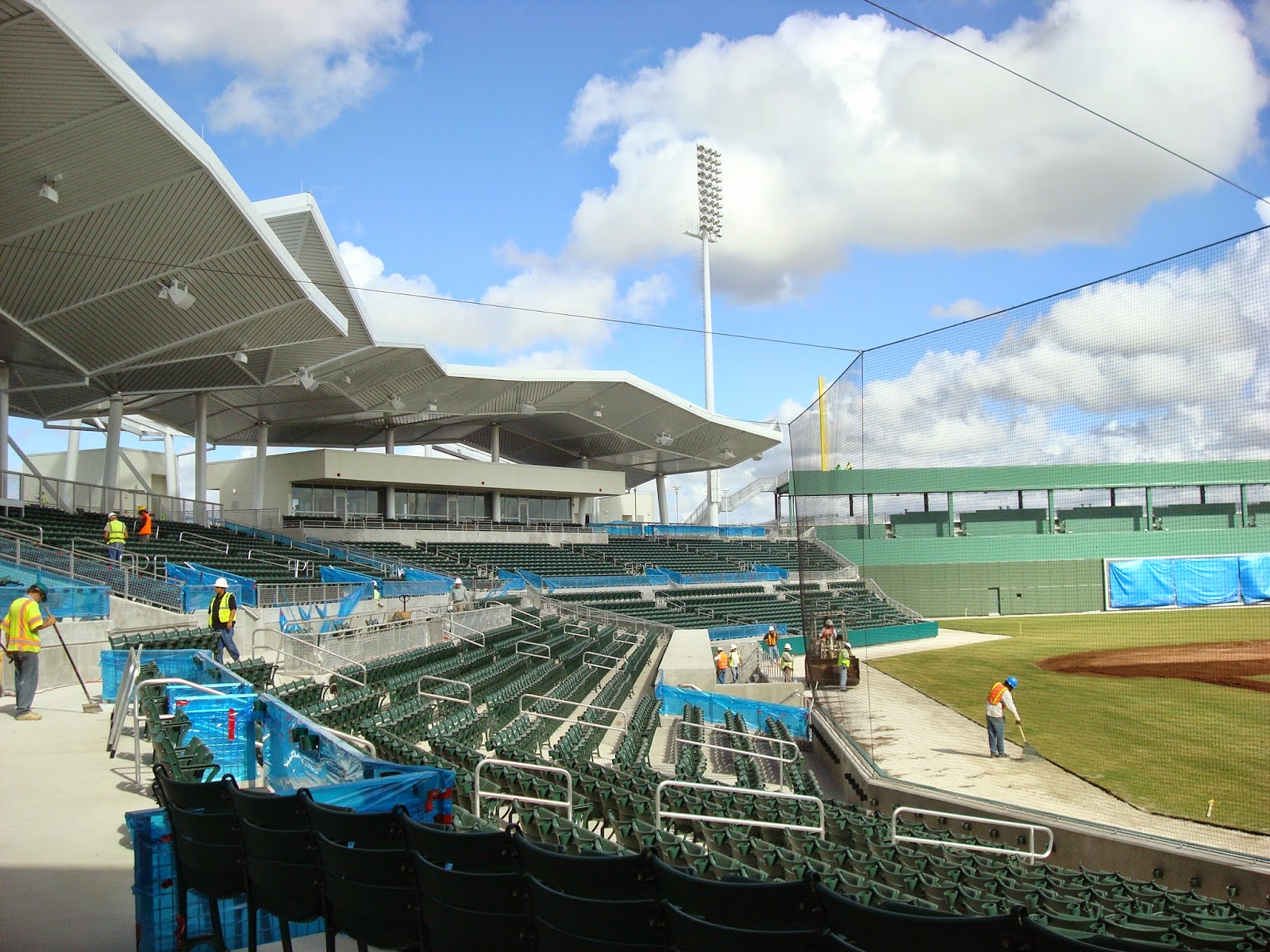 If you live on or near the Tour de Parks route you may discover that biking is the fastest way to get to baseball games. However, to make your experience a pleasant one, be sure to do the following:

• Allow plenty of time to get there… you may be moving faster than the traffic, but you still have to negotiate the same intersections and issues.

• Bring sunscreen and a hat (for the hopefully sunny skies) and stay hydrated (yes, beer counts… but water is better for the riding part at least).

• Bring a lock, since you’ll need a way to secure your cycle once you get there.

• When riding on sidepaths you’ll be dealing with heavy pedestrian traffic the closer you get to the stadiums — so remember that those on foot have priority and be sure to warn them and proceed with caution when passing pedestrians.

Find out more online at bikewalklee.org, including a map of bike facilities leading to the two ballparks; a map of the Tour de Parks route and a PDF of the county’s entire bike facilities.

BikeWalkLee is a community coalition raising public awareness and advocating for complete streets in Lee County —streets that are designed, built, operated and maintained for safe and convenient travel for all users: pedestrians, bicyclists, motorists, and transit riders of all ages and abilities. Information, statistics and background online at BikeWalkLee.org.
Posted by Darla at 2/05/2015 06:07:00 AM