FHP and LCSO conducted another quarterly pedestrian safety detail on Feb. 17th at the intersection of Martin Luther King Blvd. and Cottage Streets and Monroe Street. Thanks to officers for equipping 137 bikes with lights today!
OPERATION P.E.D.S.

Fort Myers, Fla. -   On February 17, 2015, the Florida Highway Patrol, along with the Fort Myers Police Department, completed the first quarterly wave of the 2015 Operation P.E.D.S. (Pedestrian Education and Developing 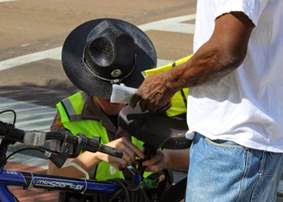 Safety details) on SR 82 (Martin Luther King Boulevard). The detail began at 1:00 pm and concluded at 5:00 pm.  Troopers looked for pedestrian, bicycle and motorist violations that occur at or near intersections. In 2014, there were 524 total crashes involving bicyclists and pedestrians, 25 of which were fatal. The purpose of this detail was to decrease the amount of injuries and deaths through a series of highly concentrated education and enforcement details in areas prone to pedestrian and bicyclist involved crashes.
****Troopers personally equipped 137 bicycles with headlight and taillights****
In total, there were 586 citizen contacts made 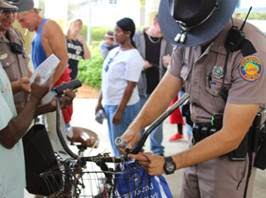 The following roadways were found to have the highest concentration of pedestrian and bicyclist crashes- U.S. 41 (Cleveland Avenue), State Road 80 (Palm Beach Blvd.), Lee Boulevard, Estero Boulevard and State Road 78 (Bayshore Road). It was further determined that the majority of the crashes occurred during the afternoon hours on Wednesdays.  FHP will continue to conduct this type of pedestrian/bicycle safety details on a quarterly basis.
Sharing the Roadway as a Vehicle: