On June 9th, the News-Press article covered the national Dangerous by Design report on pedestrian safety, with a focus on what it means for Lee County. BikeWalkLee and Stay Alive..Just Drive leaders were interviewed for this article. 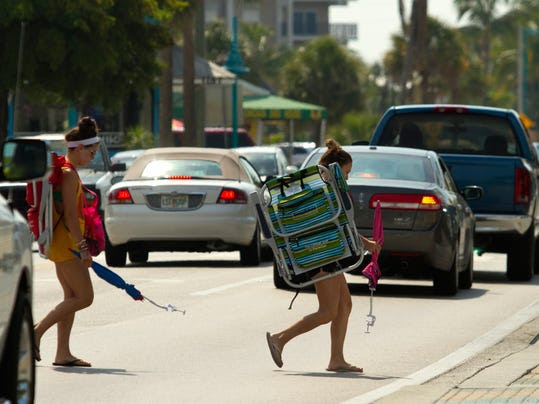 (Photo: AMANDA INSCORE/NEWS-PRESS
The death of an 84-year-old North Fort Myers woman May 27 on a Lee County road serves to illustrate a new report that shows why pedestrians in Florida and Southwest Florida stand a better chance of being mowed down by a motor vehicle than most places.
The report — "Dangerous By Design 2014" — shows that the majority of pedestrian deaths occur on roadways that are engineered for flowing traffic with little to no provision for the safety of people walking, biking or using public transit.
Nivea Sarabia, 84, of North Fort Myers, became the eighth pedestrian death in Lee County for 2014 when she tried crossing Hancock Bridge Parkway shortly before 8 a.m. May 27. The parkway at the point of the fatality has a 45 mph speed limit, curves sharply with no nearby crosswalks and has a median of tall bushes. Police said the motorist who ran into her was not charged since the woman violated his right of way.
Seventy-three percent of pedestrian deaths in Florida were on roads where the posted speed limit was 40 mph or greater (compared to 61.3 percent nationally). In Lee County, the percent was even greater — 81.8 percent.
The report, by Smart Growth America and the National Complete Streets Coalition, shows that from 2003-12 there were 5,189 people killed while walking in Florida, with 163 of those in Lee County.
The report ranked America's major metropolitan areas according to a Pedestrian Danger Index, which assesses how safe pedestrians are while walking.
The report also shows where the deaths happened. In Lee there are three main corridors for pedestrian deaths. Overall, the six-lane U.S. 41 artery from Del Prado Boulevard in North Fort Myers to the south Lee County line, and Palm Beach Boulevard, saw the most pedestrian fatalities in the reporting period.
Dan Moser with BikeWalkLee, an organization that works with local officials to make roads safer for pedestrians and bicyclists, said highway and road design has deferred to the automobile, with pedestrian, bicycle and other non-motor-vehicle uses given much less consideration.
"What we're hoping for is that the powers that be, the road designers, realize that the need for speed doesn't trump all the other things that people need," he said.
Moser said that despite the grim pedestrian death news, design changes are slowly coming. "The main folks are getting the message," he said. "Whether or not the general population is, I don't know."
Overall, the top four deadliest major metropolitan areas in the U.S. for pedestrians were in Florida: Orlando, Tampa, Jacksonville and Miami. The report also found that the majority of those deaths likely could have been prevented with safer street design.
Lee County's pedestrian fatality rate — 78 percent higher than the national average from 2003-12 — was 2.77 pedestrian fatalities per 100,000 people, compared to 1.56 nationwide and 2.83 for Florida overall. 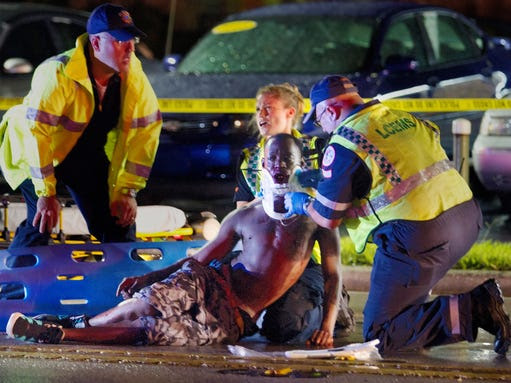 Emergency personnel care for a man that was struck by an SUV on Fowler Street in Fort Myers in September 2013. Police Lt. Jeffrey Bernice said two men and a woman were struck by a Cadillac Escalade that was headed northbound nearing Edison Avenue. (Photo: KINFAY MOROTI/THE NEWS-PRESS )
In Lee County, there were 163 pedestrian deaths during the last decade — 16.9 percent of all traffic fatalities and 37 percent higher than the national average (12.3 percent), but slightly below the Florida average of 17.7 percent. Other Southwest Florida county pedestrian death rates included 53 in Collier, 38 in Charlotte, 14 in Hendry and two in Glades.
And the carnage continues. In 2013 there were 24 pedestrian deaths in Lee County, almost double 2012's total according to the Stay Alive, Just Drive organization in Fort Myers. This year, there have been eight such deaths.
"We need to rethink the way we drive," said Jay Anderson, with Stay Alive, Just Drive. "That's always been an issue."
Anderson added that paying attention is important for drivers especially with all the distractions.
"The more time you spend behind the wheel, the more lackadaisical you become," he said. "We always let our guard down. Every time I go out I have an 'encounter.'"
While the new report was a major improvement over the 2011 report, when the metro area ranked 5th out of 20 when ranked by fatality rate, a key difference was that the data set eliminates the period of 2005-07, which saw record high pedestrian fatalities in Lee County.
Comparing all 67 Florida counties, Lee's pedestrian fatality rate for 2003-12 ranked 31st, above both the state and federal averages and highest of Southwest Florida's coastal counties.
While the figure shows a significant improvement over the 2011 report, when Lee County ranked 17th out of 67 counties, the pedestrian fatality rates and percent of all traffic deaths that are pedestrians exceeded the national averages.
The Dangerous by Design report includes recommendations for federal, state, and local officials. Since the last report in 2011, Lee County has adopted a complete streets policy and implementation plan and the Lee County MPO adopted its first countywide bicycle and pedestrian master plan, followed by a countywide bicycle and pedestrian safety action plan in 2013.
"The key now is for each local jurisdiction and agency leaders to implement the approved action plan," said Darla Letourneau, also with BikeWalkLee.
"At the local level, the challenge is to get the local jurisdictions and agencies like the sheriff's office to implement the Action Plan," she said. "It's not self-executing and isn't up to the MPO to implement it — only the cities, county commissioners, and county administration, and sheriff, and other related agencies can make it happen."
Connect with this reporter: MichaelBraunNP (Facebook) @MichaelBraunNP (Twitter)
By the numbers
5,189: People killed while walking in Florida between 2003 and 2012, — 17.7% of the 29,302 traffic-related fatalities in the state during this period.
168.65: Florida's overall Pedestrian Danger Index, placing it 1st nationally. For 2003 to 2010, these fatalities include 233 children younger than 16 and 960 adults aged 65 or older.
63.3: Percent of these people were killed on arterial roads, which are eligible to receive federal funding for construction or improvement, with federal design guidance or oversight. Arterials are often designed and operated to maximize the speed of automotive traffic and not for pedestrian safety and comfort, despite running through places where people need and want to walk.
16.9 and 21.5 percent: Respectively, Florida adults 65 or older as part of the state's population and its pedestrian fatalities from 2003–2010.
Fatality rates vary by race and ethnicity. The average annual fatality rate for non-Hispanic whites in Florida was 2.85; for black people and African Americans, 3.4; for Hispanics, 3.4; for Asians and Pacific Islanders, 0.9; data was insufficient for American Indians and Alaska Natives.
Speed related
73.3 percent of pedestrian deaths occurred on roadways with a speed limit of 40 mph or higher.
3.7 percent were on streets with a posted speed limit under 30 mph.
1.4 percent of pedestrians died on streets with a speed limit of 20 mph or lower.
Visit news-press.com to find the report and a map on pedestrian deaths.
View the National Dangerous by Design report
Review the Florida report
Interactive map of fatalities