Today's News-Press has three articles by feature writer Janine Zeitlin, telling the stories of three SWFL cyclists seriously injured recently on our roadways. Be sure to also watch the videos.  Here's the second of three.  Click here for the accompanying editorial.

STORY HIGHLIGHTS
·         Ed Stephan ended about 60 feet from where he was rear-ended.
·         The cyclist praised law enforcers and the judge for handing down a higher fine.
·         He encourages others to invest in good helmets. His saved his life.

Ed Stephan set off on his bike before dawn for Ave Maria University, about 25 miles from his North Naples townhome.

The tall, trim 55-year-old rode steadily, still recovering from the most grueling triathlon of his life, an Ironman distance a month earlier: a 2.4-mile swim, 112 miles on the bike and a 26.2-mile run he finished in under 16 hours. 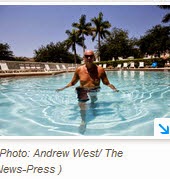 The ink was fresh on his celebratory tattoo, an Ironman insignia printed with Isaiah 40:31. The verse says: Those who hope in the Lord will renew their strength. They will soar on wings like eagles; they will run and not grow weary, they will walk and not be faint.

His true test of grit was yet to come.

This morning in late February, Stephan pedaled east in a bike lane on Immokalee Road. The fog had lifted above the trees, he recalled. His shirt, shoes and helmet bore reflector tape. His bike had lights on the front and back. Traffic was sparse as the sun began to rise. He soaked in the quiet.

Then, came a blow from behind, fierce and quick, like being shot from a canon. He flipped, glimpsing blue sky before careening toward the blacktop.

This is it, he thought, the last time I see the sky.

He landed near the sidewalk about 60 feet from impact. He wiggled his toes to make sure he wasn't paralyzed. He waved for help as cars zoomed by him. He didn't know it then but the driver of the Ford van that struck him continued nearly 500 feet toward Oil Well Road before ending in the right-turn lane with a flat tire.

Eventually, a young dark-haired woman stopped to help. Then came a Collier deputy, who kept him grounded for his safety, and emergency workers.

The ride to the hospital felt like a lifetime. He gasped for breath due to a punctured lung. In the emergency room, he felt a warm sensation in his calf. A gash ran through his new tattoo. It needed 60 stitches, but what he couldn't see was far worse. He broke three vertebrae in his neck and five ribs. His fractured back required the surgical insertion of two rods and six titanium screws. His bike was mangled, but his Kevlar helmet stayed intact.

That is one message he now delivers: Spend money on a good helmet. He sees the need for sweeping public service announcements about sharing the road and giving cyclists three feet. Too many motorists see cyclists as nuisances. People posting to initial media reports of his accident criticized him for riding in a bike lane.

Florida Highway Patrol cited 28-year-old Daniel Barberena, for careless driving. Barberena told troopers his wipers weren't clearing the windshield. Stephan praised law enforcers and the Collier judge, who handed down a $1,603 fine for Barberena. His license was suspended for three months. (A court appearance is required for cases involving serious bodily injury or death and a judge decides the fine.)

It's been almost four months since the crash. Stephan still has nightmares. His body feels ancient. He can't sit, sleep, walk or turn his neck much without pain. His wife of 21 years, Susan, can't hug him because of his injuries. Home can feel like a prison. He has been unable to return to his job as a manager at a high-end retailer. Until recently, he couldn't scale the stairs to his own bed.

His drive to compete has not subsided. He's looking for a new bike, though likely won't be able to race until 2016. Once he can ride again, he plans to use an indoor stand for his bike to minimize his time on roads, especially after reading statistics like the ones released by The League of American Bicyclists in its May report examining cyclist fatalities. Driver error caused most, and rear-end collisions accounted for 40 percent of all deaths.

Susan Stephan told her husband the Ironman tattoo and Bible verse was meant for the past four months, not the race.

"This was definitely harder," she said.