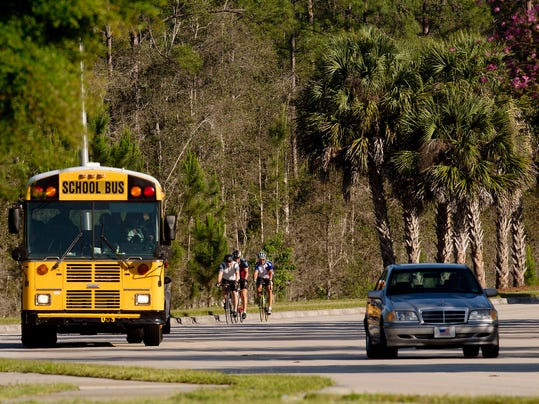 Robert Vigorito clipped on his cycling shoes around 7:30 a.m. outside The Brooks fitness center in Estero.
It was a balmy May morning and the part-time resident's last ride of the season before returning to Maryland. His shoes click-clacked across the parking lot as he joined a handful of riders around his age.
The 66-year-old retired neuroscientist ranks among triathlete royalty. He's competed in the Ironman World Championship six times, was a race director in Maryland for 30 years and has been honored by USA Triathlon for lifetime achievement. But he's not immune to crashes.
In March, 65-year-old driver Phyllis Bergeson cut off Vigorito in a bike lane as he headed south on Imperial Parkway near Dean Street in Bonita. She turned her Toyota SUV right in front of Vigorito, who led a handful of cyclists riding straight. Vigorito flipped off the side. Medics rushed him to the hospital. He suffered a mild concussion and broke a vertebra in his back. Vigorito estimated his speed at 18 miles per hour. The report said the driver failed to yield, but the woman was not cited; the other cyclists told him the driver accelerated to try to turn in front of them.
"Every time I closed my eyes, 'I'd see him on the ground.' I like to see him a lot of places, but that ain't one of them," laughed Rick Boe, 70. The experience kept Boe off the bike a few days until Vigorito urged him back into the saddle.
"If you quit, then they've won and we've lost," Vigorito told him.
Vigorito still has a hard time sleeping because of the back pain. He follows a routine of ice, heat and stretching. His ears ring.
He didn't want to shrug off the issue of not citing the driver. He connected with Ted Zelman, a personal injury attorney who is an avid cyclist and sits on the board of the 800-member Naples Velo cycling club. Zelman wrote a March 26 letter to Sheriff Mike Scott, listing five violations for which Bergeson could have been cited. He noted witnesses, who could testify that Bergeson caused the crash.
DFC Ellison's decision to not charge the motorist in this crash undermines respect for the law, and respect for the Sheriff's office. It also demeans bicyclists and sends a message to them that their lives and safety are unimportant, he wrote.
Sheriff Scott has directed his office not to answer questions from The News-Press, so the agency's response to the crash has been gleaned from public records.
John Holloway, the agency's legal director, responded to Zelman. It's up to the officer whether or not to issue a citation.
Our deputies routinely elect not to issue citations for crashes which they do not witness. This practice has developed over time as a result of having 'lost' in traffic court when such citations are contested, he wrote in an April 23 letter.
Major Kathy Rairden has offered to place deputies in group rides and along ride routes to better help enforce the laws, Holloway noted.
While not satisfied with the lack of a citation, Zelman plans to urge groups to take the agency up on its offer next winter season.
"The more interaction we have, the better the future will be," he said. "It will force the bicyclists to obey the law as well."
Vigorito has asked Zelman to work with the driver's insurance company to cover the medical costs for his injuries.
"We've got to make a statement," Vigorito said. "It's not about money. I'm glad I'm alive. I don't want to be a dead statistic or a crippled statistic."