Lee County's regional transportation plan is in the process of its every five year update and it's important that our elected officials hear from the public about how to address the transportation needs of our growing communities. On June 20th, the Lee MPO Board will choose a land use scenario that will be the foundation upon which the 2040 Long Range Transportation Plan (LRTP) Update is based.  The Land Use Scenarios report, along with the consultant's recommendation, are now available. 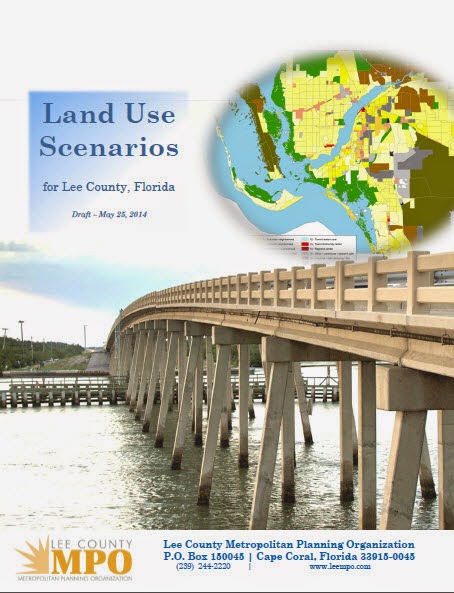 Scenario C is the best choice for Lee County’s future.
Scenario C supports the vision of a balanced multi-modal transportation system, providing citizens with more transportation choices, including safe and functional transit, walking and biking. By outlining a deeply interconnected multi modal transportation system, offering a variety of travel options, this scenario is the most cost effective, enabling fewer and shortened vehicle trips with significant reductions in overall Vehicle Miles Traveled (VMT.) Before the MPO Board votes on June 20th, it's important that they hear from citizens and organizations.  Plan to attend the meeting on June 20th to speak or contact the MPO Board before the meeting to share your views.


“How can you help make this happen?”...see below  ‘How to participate"

Background
Lee County continues to be a growing community, with a population of approximately 625,000,  reaching over 1 million by 2040, an increase of nearly 400,000 new residents. Smart planning for these 400,000 new residents is imperative in meeting future transportation and job and housing needs for the next 25 years. Three different conceptual growth scenarios were developed to assist the MPO Board in choosing a preferred approach to our future growth and this is a first step in that process and the development of  the Lee County 2040 Long Range Transportation Plan (LRTP).

With  the adoption of the 2035 LRTP in December 2010, the MPO Board also adopted a set of goals that directed staff to use new scenario analysis and modeling techniques with robust public participation for the development of the next LRTP Update.  It was expected that this update would achieve the stated goals of a "world-class, balanced, and multi modal transportation system that has the capacity to move people and goods in a cost-efficient and effective way” and "maximize the use of existing transportation facilities and explore opportunities for improved connectivity before adding new facilities to the MPO's Plans.”(See Resolutions 2010-12and 2010-13.)

To implement this scenario planning MPO staff and its consulting team have undertook an intensive exploration of optional growth patterns to reduce or shorten vehicle trips and increase other travel choices. A series of alternative land use scenarios  allows the MPO and citizens of Lee County to evaluate the costs and benefits of different patterns.

Linking transportation and land use planning  is now recommended by federal legislation and national guidance and best practices across the country and this is Lee County's first time using such a planning approach.  Connecting land use and transportation planning and resources to lower costs and improve community and economic development has a new urgency in a future of reduced funding.
BikeWalkLee has been a strong proponent of this effort since 2010 and commends the MPO Board, its staff, consultant team, and advisory committees; along with planning and transportation staff throughout the county, stakeholders, and the many citizens who have been part of this rigorous and collaborative planning process.  It has been a model of the multi-jurisdictional, multi-discipline collaborative effort and genuine public engagement that is the new paradigm for integrated transportation and land use planning.

What a success the online survey was! Thanks to all who participated. In total, 1,227 people throughout the county engaged in the survey and over 900 people took the time to write individual comments, all of which was compiled and analyzed in preparing the final report. Participants were asked to select their personal top five priorities and rank them.  Guess what priority was #1 across the board (ranked #1 in 8 out of 9 communities (and ranked #2 by the 9th community))? -walking and biking, followed by water conservation, less driving, preserve rural land, and access to transit.  And, of the three scenarios, survey participants across the nine communities in Lee County preferred Scenario C ("transit focused").  It is interesting to note that citizens preferred the approach (Scenario C) that also happened to be the best according to most technical scales (see the graph below). The write up on the survey results can be found on pages 21-23 of  the report.

Indicator Ratings for Each Scenario (see p. 17 of the report) 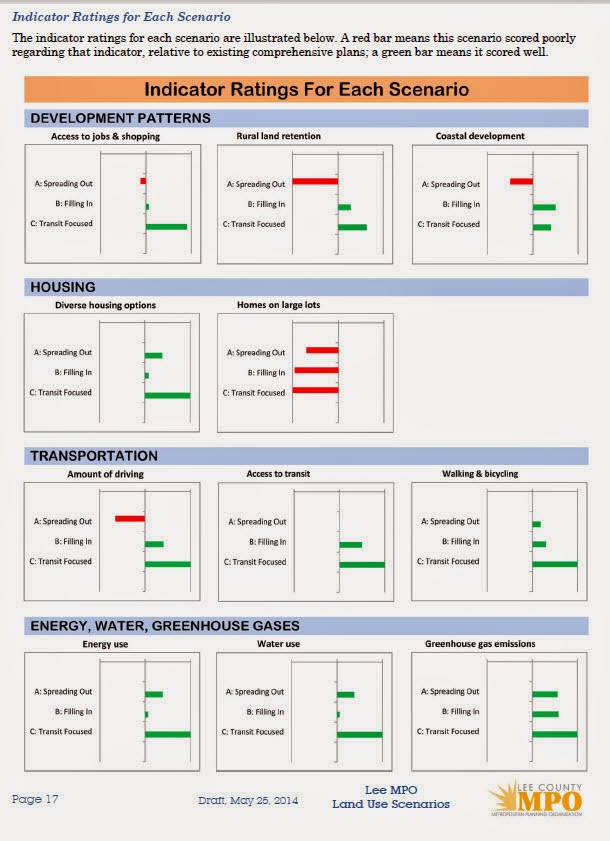 
After extensive collaboration with all jurisdictions and agencies, extensive consultation with stakeholders, and public engagement, the process of selecting the preferred land use scenario is at a decision point.  The scenario selected will become the basis of the future transportation vision in the MPO's forthcoming 2040 LRTP.

The MPO Board will be voting to select one of the three options at their June 20th meeting.  The three scenarios lie on a continuum from the most dispersed (Scenario A) to the most compact (Scenario C):

Scenario A (“Spreading Out”) is modeled closely on the land use pattern that was used to create past transportation plans, and may be best described as "more of the same".
Scenario B (“Filling In”) is modeled after current comprehensive plans in Lee County and all its municipalities, which focus on in-fill-type development and growth in the already built and urbanized areas, but is still an auto-centric plan.
Scenario C (“Transit Focused”) assumes success of the in-fill approach in Scenario B and then integrates a connected, multi modal and transit-oriented transportation network.

The citizen's preferred the approach -Scenario C– is that also recommended by BikeWalkLee and the best for Lee County as can be seen through analysis by the 11 individual Indicators (see graph above).

In reaching their decision, the Board has the following recommendations to consider:

The Conservancy of Southwest Florida submitted a letter to the TAC and CAC committees on June 2nd recommending Scenario C. .

The Concerned Citizens of Bayshore Community (CCBC)  also wrote a letter to the committees on June 4th in support of Scenario C and stated its agreement with the analysis and recommendations in both the Conservancy's letter and the consulting team's memo.

BikeWalkLee spoke in support of Scenario C at the June 5th MPO committee meetings (and will be submitting a letter to the MPO Board next week).

Lee Public Voice (LPV)  supports Scenario C. (LPV is a network of organizations and associations that are working for better governance and meaningful public engagement, focused on issues that affect our sensitive natural resources, exceptional quality of life, and a growing, diversified economy.)

How to participate:
It is important that the MPO Board  hear from citizens on this important matter before they make their decision on June 20th.
Here are several ways you can participate:

Write the MPO Board Members in advance of the June 20th meeting.  There are 16 members of the MPO Board (elected officials from each jurisdiction, with numbers based on a population formula).  Here is the link to the MPO Board roster which includes e-mail addresses and phone numbers for each member. You can choose to write all MPO Board members or just contact your local delegation.

Write one letter or email to the MPO Executive Director, Don Scott (dscott@leempo.com) and request that he circulate your letter to all members of the MPO Board.

Attend the June 20th MPO Board Meeting and speak during public comment period:

How:   Public comment is always welcome and is taken at the time each agenda item is considered.  The agenda for the June 20th meeting should be posted by June 12th, so check then to see the agenda item number of this topic.

To speak during public comment periods, just fill out a card at the desk upon entering the council chambers and hand it to the MPO Chair (Councilman Steve McIntosh of Bonita Springs) prior to the beginning of the meeting.

Members of the public are asked to limit their comments to 3 minutes, but the "green/yellow/red light system" is rarely used.  Remember, they want to hear from you.

The full report on the Land Use Scenarios

To learn more about the scenarios project, visit the Lee MPO website.

How to participate in the process:

Guidelines to testifying before the Board of County Commissioners and other county meetings and media.