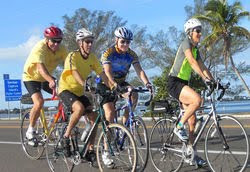 Kudos to the Sanibel Bicycle Club and its many Sanibel partners for initiating and managing this important new welcome and information center on Periwinkle Way. A special thanks to Tom Sharbaugh (BikeWalkLee's Sanibel representative), who is the project manager. Below is the article that appeared in this week's Island Reporter. WINK News also covered the story on Jan. 16th. Click here for the WINK video.
Built for BicyclersJanuary 12, 2012BILL SCHILLER (bschiller@breezenewspapers.com) , Island Reporter, Captiva Current, Sanibel-Captiva Islander
With its balmy breezes and graces of green spaces, Sanibel Island holds special allure for those who admire the outdoors. Beyond the beach goers and the crowd at Island Cow Restaurant that typically mooooves outside for lunch, on most days of the week, the climate is appealing enough to observe a variety of people pedaling on bicycles along the sidewalks of Periwinkle Way as well as other popular shared-use paths that snake throughout the City. The Sanibel Island Bike Club is in the process of creating something that will further cater to the biking community.

In the coming weeks, a pavilion that serves as something of a Bicycle Visitors Welcoming and Information Center will be erected at a site situated on Periwinkle between Huxter's Market and the She Sells Sea Shells store.At present, the site only has some wooden posts marking off the space, but as Bike Club Member and Project Coordinator Tom Sharbaugh explains, with the anticipated arrival of the necessary building materials, ground could potentially be broken on the site as early as next week.When complete, the 15ft x 12ft pavilion will be complemented with items that include: a comprehensive map depicting the entirety of bike paths throughout Sanibel; information on nature areas worthy of tour (courtesy of the Sanibel Captiva Conservation Foundation); details pertinent to the history of the site as well as other significant locations on the Island (courtesy of the Sanibel Museum & Historic Village); a bike rack for parking (donated by Billy's Bike Rentals); white benches (donated by the Lion's Club); and a water fountain, which is always refreshing to bicyclers.

Support for the project has been so great that Sharbaugh calls it "a great example of community participation."The project isn't costing the City anything as Sharbaugh says the initiative has garnered widespread approval from many who have donated materials to support the project.